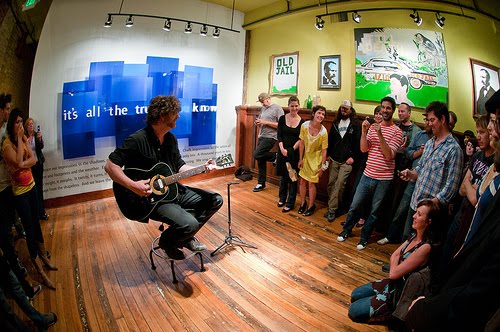 “Remember when you go looking for epiphany that the fields are on fire…”—Ben Shepherd’s (Soundgarden) monumental lyrics cut from vinyl scale the purple walls of the historic OK Hotel Gallery—the collapsed epicenter of Seattle grunge—in the exhibition that runs through July 31, Dimensions of Reflection.

Artist Ryan Crase tames the distinct revelations of musicians and poets into heady, billboard-sized phrases made of plastic and Styrofoam. The works wrap around the existing structure, challenging visitors to explore the limits of the space. These and other artists’ experiments abetted a dynamic of loud street aesthetic and private inspiration. Their disparate voices called in unison one thing: the need to create.

Spencer Moody’s paintings—self-conscious and quirky—are all his own. His muses range from the infamous martyr Vanzetti to his wife Coco. Leading up to the stage, Moody’s ad-hoc construction of, as he calls them, “abandoned and failed” paintings (sandwiched between two pink elephants painted on plywood) balance on a silver trashcan, the wood splintered and splayed.

This place, ripe with histories and passion, is a work in progress. There are no wall texts identifying individual contributions. The multi-layered past of the institution, and its collaborative visions, create a room of desires, full of potential—a breeding ground for future ideas. The gallery’s director, Eric Swangstu, plans to amp up the revolving roster in the years to come—turning a creative graveyard into a generative temple.

Pulling artistic visions out of their purgatory into reality reminds me of a piece by East Coast artist Zach Rockhill from a show at Crawl Space last summer, which directly addressed the motives expressed by each of the artists in Dimensions of Reflection—and which deserves being reminded about.

Rockhill’s show Stockgap, made up of two videos and works on paper, seethed with violent desperation. His video As for the Motive… showed the artist cutting, tearing, gluing, and painting, not to obtain a finished product, but to tease out the psychological subtleties in the act of creation.

The seven-minute film consists of footage from a seven-day performance in which the artist recreates the enigmatic chamber from Andrei Tarkovsky’s sci-fi classic Stalker (1979)—where the characters’ “innermost desires” come to life. (The room is hidden within an unpredictable section of land referred to by the movie’s characters as “the zone,” where the laws of physics no longer reign.)

Not unlike the artists in Dimensions of Reflection, Rockhill uses industrial materials (Mylar, cardboard, paper, and hot glue) to reconstruct the space in As for the Motive. His dimly-lit video—colors dull, but contrast high—depicts the room lost in shadows and shards of debris, like the decrepit interior of Tarkovsky’s old power plant.

The artist destroys as he creates. As in work by Francis Bacon, Rockhill injures the image in order to more truly articulate the subject’s essence. The artist arranges frames within frames of varying sizes, in a restless, overlapping collage that overwhelms—like a Peter Greenaway film gone insane. The clips of his performance show the varied, fervid moments of creation that all artists experience. We see him in the fore-, middle-, and background and sense him near us. The nauseating pace enhances the awkward relation of thought and physical space, which prompts the question: How does a thought mutate during its transfer into the physical world?

Video allowed Rockhill, a performance artist, to move beyond the limitations of regular perception and the perspectival laws so entrenched in film. Perspective, though rooted in science, can look strangely unreal. Rockhill’s method more poignantly articulates lived experience, recreating the kaleidoscopic mental montage of artistic creation itself. The title, As for the Motive…, recalls the central theme in Stalker: desire. But for what? What does any artist seek: fame, happiness, release, maybe sanity? Or is it the sheer revelation that only creation makes possible? The supreme drive is to create.