The City Council Is Lying to You, Seattle 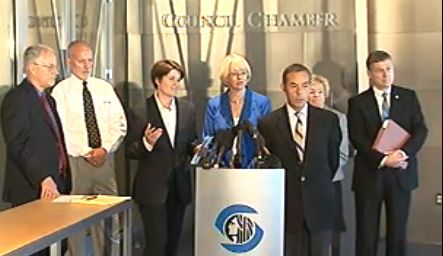 Yesterday, six members of the Seattle City Council said they had a plan to both protect Seattle’s taxpayers and move forward with the deep-bore tunnel.

The council will vote next Monday on a resolution to wait for the state to approve construction bids before it approves a contract with the state. This, they say, will allow us to be certain that the project won’t come in over budget. The city is also not liable for any of the cost overruns on the project, the council says in its nonbinding resolution. All of this, we are told, will achieve progress and protect Seattle.

They're lying to you.

The quick and dirty background of where we are now: The state has been pressuring the city to approve the contract to allow construction under downtown on the $3.1 billion tunnel. The council insisted for months that delays were intolerable and that we couldn’t ask the legislature to decide who would pay cost overruns on the tunnel—clearing up a state law that says Seattle property owners must pay—because that would cause delay. But yesterday the council flipped its position, saying we could wait to sign the contract, a.k.a. delay signing the contract, until February.

Here's where the council isn't being straight up:

One: The claim that this resolution lets the city scrutinize bids before the state begins the project is deliberately misleading. The city council always had this opportunity in the ordinance it was planning to approve next month; by inserting a provision that says Seattle reserves the opportunity to back out of the project if the bids come in too high or the numbers look cooked, we would have had the same protection. In fact, City Council Member Tom Rasmussen even said in a recent interview, “If they [the bids] come in way over, then we need to have contingencies.... The city would be able to opt out or we would begin further negations. I think that we need have that sort of provision in there.” This isn’t about affirming our commitment to seeing the bids and making an informed decision—the transportation chair always saw that opportunity—it’s about postponing an ordinance, which is subject to a legal challenge. The political weather is too hot right now: the city at large disagrees with the council, and the council members are trying to wait out the storm.

Two: Make zero mistake, this is about locking Seattle into the project while attempting to dodge a public vote. City Council Member Sally Bagshaw admitted it yesterday when she said at a press conference, “It will also give the contractors the kind of assurance they need that the city is going to be there for them; that we're not going to waffle; that we're not sending this out to a second public vote.” Bagshaw isn't telling the whole truth here: the first vote wasn’t on this tunnel, and it wasn’t on this rickety financing plan in which the state legislature has absolved itself of all responsibility for paying cost overruns. Moreover, Bagshaw is wrong when she claimed, "People say that this is the biggest tunnel that will ever be bored. That's not necessarily the case. Japan, Germany, China all have done the kinds of tunnels of the size we're talking about, and there's two that are even larger on the books in Russia." She's lying.

Three: They say this is the best way to protect Seattle. But by waiting until February to pass an ordinance, the city council is giving up best point of leverage to compel the legislature to clarify who will pay cost overruns on this project. The 2011 session is only 105 days long—and at least half of the session will be over by the time the city acts. Asking the legislature to act at that point would add another year—truly delaying the project. If we passed an ordinance now that says the project can’t go forward until the legislature acts, it would force the city’s entire legislative delegation to introduce a bill and push it at the start of the legislative session. Many state legislators have said they would introduce such a bill, but not unless the city says they must.

Four: The council is pointing out legal opinions and statements from attorneys and the governor (who is an attorney herself) that says the existing law is not—on its own—enforceable. This is and has always been irrelevant. The law at issue is a statement of legislative intent to make Seattle pay. If the construction team building the project encounters unforeseen conditions and cost overruns occur, it is allowed to collect money from the state. Only the state legislature—not the city council, not the attorney general, and not the governor—can decide where that money comes from because the legislature capped its spending at $2.8 billion. It can either raise that cap or it can do what it said it would do: collect that money from Seattle. AG Rob McKenna was clear about that possibility: “A future legislature may choose to enact additional legislation necessary to make this cost overrun provisions operative,” he wrote to the governor. And that is, in fact, what the legislature said it would do. “If we have cost overruns,” state Rep Judy Clibborn said when introducing the amendment on paying cost overruns, “We will ask the city … the people who live along the viaduct, the property owners in Seattle, to come forward and pay for the cost overruns.”

Five: Waiting for the bids will tell us nothing about cost overruns. Bids for the Brightwater sewage treatment project in North King County came in 20 percent below budget. Then, after the bids came in and while construction was underway, two of the tunneling machines got stuck. One for nine months and the other has hasn’t budged in over a year. The project is 24 percent over budget and counting. Cost overruns happen after the bids come in.

Six: A public vote on an infrastructure project isn’t appetizing, but there’s a reason the initiative process exists. When the lawmaking bodies are too cowardly, too quixotic, or just failing to plan during the planning process—and right now, we're planning for a tunnel and planning how we're going to pay for it—voters can step in. The council may be dodging a referendum, but citizens can still file a proactive initiative—and they should. People should file an city initiative that would require the state legislature to remove the provisions about Seattle paying cost overruns and address who will pay if the project runs over budget before Seattle gives permits to dig underground. Remember, 90 percent of megaprojects run over budget. A successful initiative would force our legislative delegation to act. And it wouldn't be a vote on the entire tunnel contract, nor a vote to kill or let live the tunnel. It would be just about costs and who will pay them. We should have a public vote on that question because the council is running away from that question and feeding Seattle flimsy, incredulous lines of crap while they do it.