What Makes A Great Stranger Cover, Or the Power of Context 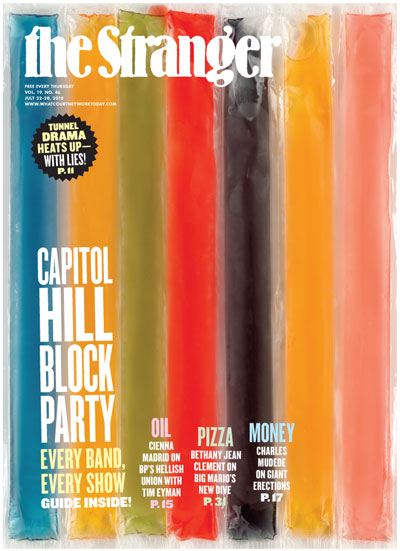 I'd argue that this week's cover of the Stranger is pretty great. It's bright and summery, and it happens to hit right as the sun comes out in full force. It's a package of Otter Pops, for chrissakes, and it's throbbingly beautiful. How can you do better for a July cover? This cover, in fact, is the exact, exuberant opposite—even formally speaking, this present vertical stripe to that past horizontal stripe—of another classic Stranger cover: the Blue House cover, which we printed the week after the murders at the Blue House. The cover space is its own context. It builds up its own internal history in addition to its external connections both intended and happenstance (the murders, the perfect summer weather after an unbelievable stretch of July grey). I love this cover; it's pretty close to perfect.

The image is by Isaac Layman. In real life it is 6 by 4 1/2 feet and stands in a white-cube gallery at Lawrimore Project along with several other images the same size and the same subject (though the colors of the Otter Pops vary).

In that configuration, I was considerably less impressed. And the image's success as a Stranger cover does nothing to persuade me that the image in the gallery is any better than I thought when I wrote this in my review of the show:

Layman is clever, and this has its short sides, namely, self-satisfaction and artiness. A few of his works fold too neatly into the pages of art history: A roomful of giant photographs of packets of Otter Pops is, well, too pop. They're perfectly enjoyable as a right-in-your-freezer subversion of a color-field painting chapel by Rothko, and they're ingeniously installed, ringing the gallery's white cube room beneath a rectangular fluorescent light amid track spotlights—the flat coloring of the fluorescent, oddly, making the room feel skylit. But this neat operation is not the full extent of what Layman can do.

It's not that the Otter Pops are an utter failure in the gallery—and plenty of people have disagreed with my assessment and bought them in that larger-than-life form (I wouldn't be surprised if you see one or two of those giant Otter Pop images on the walls of your local museum someday soon, nestled perfectly into the art historical canon narrative).

It's just that the image is better as a Stranger cover—an unexpected, glowing newsstand gem that flashes and streaks at the right moment and then disappears. Every image cannot be separated from its use. Never underestimate the power of context.