The Heck He Is (A Republican)

Denny Heck is the Democratic front runner for the closely contested 3rd District congressional seat, but there may be some voters in his district that end up believing he's a Republican—and its not just because of his moderate leanings.

As first reported by Liz Mair, Heck was erroneously labeled as a Republican candidate in a notice about the upcoming primary that appeared recently in the Chinook Observer, a local Pacific County newspaper. The notice, which listed all the candidates in the primary races and their party affiliations, appeared in the newspaper's legal ads section and actually originated from the Pacific County Auditor's office. 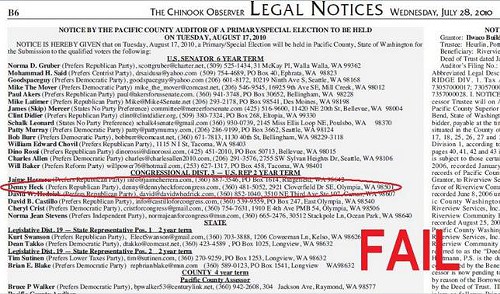 Pacific County Auditor Pat Gardner, a Democrat, explains that her office simply copied a notice they received from the Secretary of State, proofread it, and then issued it to the papers as a legal notice. She says the error in Heck's party affiliation was not in the documents given to her by the Secretary of State, which means the change must have occurred while it was in the possession of her office, and escaped attention during the proofread.

The notice, with the error, was given to the only two newspapers in Pacific County: the Chinook Observer and the Pacific County Press. The mistake has since been fixed online, and, according to Gardner, does not affect the ballots now headed to Pacific County residents.

It's unlikely this mistake will have any large effect on the outcome of the Aug. 17 primary. The Chinook Observer has a small circulation (it puts it, somewhat mysteriously, at "more than 6,800") and, while the Pacific County Press refused to reveal their circulation, it can't be large considering the sorry state of their single page web site. Furthermore, the papers' combined circulation is only a fraction of the total population of the county (estimated by the U.S. Census Bureau to be about 21,200 people in 2009). In other words, the number of potential votes that could even possibly be affected by this screw-up is small, especially when compared to the total number of ballots cast in the last congressional election for the 3rd District, roughly 340,000.

But if the mistake somehow does affect the election, it would likely only hurt Heck. Pacific County tends to support Democratic candidates (retiring incumbent Democrat Brian Baird won about 70% of the county in '08), and some of the county's Democratic voters who read the notice may mistakenly believe that Democrat Cheryl Crist is their only party option. If they don't check again when filling out their ballot, Heck stands to lose... a handful of votes.

A handful because honestly there's probably only about 27 people in all of Pacific County who even read these public notices from the county auditor. And, anyone interested enough to read the notice probably already knows Heck is a Democrat. (And, anyone who doesn't know he's a Democrat probably won't vote at all.) So if this was some grand election-rigging scheme masterminded by an innocent looking county auditor, it was a bad one because: 1. If it hurts anyone it will hurt Gardner's fellow Democrat, Heck and 2. The chances of it actually affecting any votes are remarkably slim.