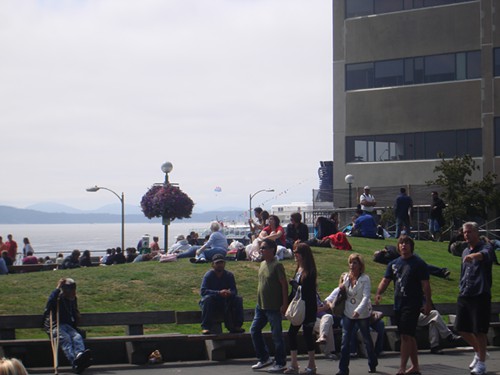 The number of homeless people camping out on Seattle streets at night (about 1,986 at last count) could increase by the end of next week. One of King County's largest shelter networks, Seattle Housing and Resource Effort (SHARE), said Saturday that it will have to close 11 of its 15 indoor shelters due to a lack of city funds. SHARE estimates that 400 homeless men, women, and children will be out of a place to sleep, putting pressure on other city shelters which are already over capacity.

SHARE receives $300,000 from the city for its shelters annually and some money to provide bus tickets to homeless people, says Sara Levin from the City of Seattle's Human Services Department. It needs about $50,000 more to keep those 11 shelters running. When asked what it would mean to have more homeless people out on the city's streets, Levin directed all queries to Mayor Mike McGinn's spokesperson Aaron Pickus.

"I don't have any details on this at the moment, but would like to point out that the city is currently facing a $50 million deficit," Pickus replied via e-mail. The Stranger is still waiting to hear back from the mayor's office about whether McGinn had a chance to meet with SHARE to talk about homeless issues. Beatrice Friberg, a member of SHARE says that homelessness is at an all time high four years into King County's 10-year plan to end homelessness.

"Our job is to ensure that there are agencies and shelters out there to take care of homeless people," Levin says. "We have already allocated $6.7 million dollars to different agencies this year."

UPDATE: At 1:53 p.m. Aaron Pickus wrote to say: "About 25-30 members of SHARE arrived in our lobby about half an hour ago to request a meeting with the mayor. The mayor greeted them and invited them in to our main conference room to meet with our chief of staff and director of policy and operations."

Why Seattle Is Still Building Lots of New Buildings