Sidestepping the city council’s latest attempt to block a public vote, several groups that were planning a referendum on the deep-bore tunnel last month say they are now likely to file an initiative instead.

This initiative will be different from one filed last week, which was a long-shot measure intended to stop the tunnel project completely. That measure was filed by Elizabeth Campbell, an advocate of rebuilding the viaduct, who has twice filed anti-tunnel measures that failed to get enough signatures.

But this measure—to be backed by organizations with large volunteer forces and proven track records passing ballot measures—would specifically address the issue of cost overruns. Among proposed language, it would prevent tunnel construction under downtown until the state removes a now-infamous law outlining the legislature’s intent to make Seattle pay cost overruns. Tunnel projects typically run 34 percent over budget; the state's portion of the project is $3.1 billion.

“An initiative is basically a gun to the state’s head,” says Tim Harris, director of Real Change, one of the leaders of a potential initiative campaign. “If they don’t change that language, the whole tunnel project is at risk of being voted down.”

Brady Montz, another person behind the effort and director of the local chapter of the Sierra Club, points out polls that show the public supports seeing the cost-overrun liability addressed in state law before the project proceeds. “No matter what you think about tunnels and bikes and buses, you can’t have that hanging over our heads,” he says.

SurveyUSA released a poll last month, asking 500 Seattle residents, "Seattle Mayor Mike McGinn wants construction of the tunnel to wait until the state promises to pay for any cost over-runs. Do you agree with the Mayor? Or disagree?" The poll found 63 percent agreed: 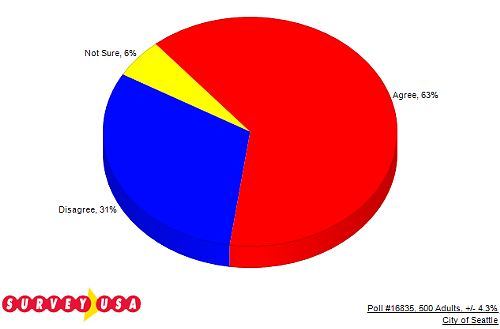 The city council was slated to approve a set of ordinances to allow the project to proceed later this month, claiming that any delay would kill the project. But then the council abruptly announced last week that it would delay the contracts until next winter and, for now, pass a nonbinding resolution. However, the strategy was a transparent attempt to block a referendum on those contracts.

“We're not sending this out to a second public vote,” City Council Member Sally Bagshaw said at a press conference announcing the resolution last week. Resolutions aren't subject to public votes. And several sources at City Hall believe the council intends to approve the contracts as an administrative action next winter, thereby blocking a referendum.

The council is expected to vote on the resolution today. City council member Mike O’Brien has five proposed amendments that would state—again, because a resolutions is only a pledge and not a binding law—the city’s desire to make the state amend its cost overrun law, seek transit funding, and ask the state to mitigate traffic on Pioneer Square. Council members Richard Conlin, Jean Godden, Sally Bagshaw, and Nick Licata are all expected to produce counter amendments to gut or weaken O’Brien’s proposals.

Regardless of Conlin, Licata, Bagshaw, and Godden’s attempts to steamroll through the resolution, the initiative looks inevitable. “I think that initiative is a critical part of putting pressure on the state to change that language with or without the resolution,” Harris says. So no matter what the council does, an initiative could be filed? “Absolutely.”

But it remains unclear exactly when an initiative would be filed. “People who are good at filing initiatives at the right time are watching very closely,” says Montz.

Slog PM: COVID Is Still a Killer, Jeopardy! Faves Return, and a Right-Wing March on Washington Eats Its Own Tail