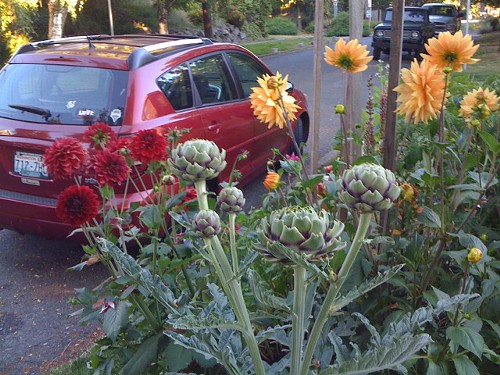 Get your pitchforks, Seatte. The Seattle City Council’s Regional Development and Sustainability Committee voted today to approve urban farms and community gardens in the city. The committee's action paved the way for a new set of rules, that, if approved by the full council August 16, will allow for-profit farming in your backyard.
Sponsored

Roosters, however, did not make the cut. Although the new ordinance allows the number of domestic fowl (chicken, geese, etc.) to be increased from three to eight, it bans roosters from the city. Committee chair Richard Conlin, who was initially on the side of the noisy cocks, also voted in favor of this ban. We are waiting to hear back from Conlin about why he changed his mind. Committee member Jean Godden confessed her love for chickens at the meeting ("I kept some").

We have already debated roosters on Slog, and given you the rundown on how to become an urban farmer. But if you want a recap, the highlights of the new ordinance include no use permits for urban farms up to 4,000 square feet, greenhouses over 15 feet of the permitted height limits (only if they grow food), and community gardens all over the city.

In case you are wondering what's going to happen to the roosters that are already there in the city, Department of Planning and Development planner Andrea Petzel says they are "allowed to exist for the life of the rooster, but still subject to regulation by the noise ordinance."

1. Existing roosters will continue to be allowed, so it won't take anything away from anyone or lead to a bunch of abandoned roosters.

2. Roosters are not really an issue for local food work, and this was a distraction from all the other good things in the legislation.