Mike Daisey Goes to China So You Can Change the World 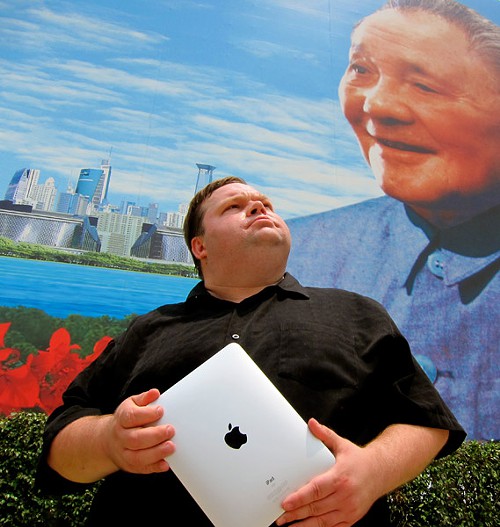 This past weekend I discovered that there had been fingers inside my iPhone before I got it. Somehow I'd imagined that my phone was made almost exclusively by machines. Turns out the opposite is true. Chinese fingers are very, very cheap, cheaper than machines. The fingerprints are wiped off with alcohol before the phone is packaged. If the factory runs out of alcohol, they swap in hexane, which is poison. Workers are strictly forbidden from unionizing. During the intense runup to make the release deadline for the iPhone 4, workers were flinging themselves off the factory buildings to their deaths. So the companies put up nets around the buildings.

Apple knows all this, and so do we, on some level we ignore. Mike Daisey went to Shenzhen for three weeks—just flew in, parked himself outside factory doors and lied his way into factory boardrooms, and talked to people—and now he can't ignore it anymore. And so he is in the process of making a monologue about it, an activist monologue, which at the end may tell you just exactly who you can contact to push the company to change. That monologue, called The Agony and the Ecstasy of Steve Jobs, had two workshop performances this past weekend, and it will return to Seattle Rep in the spring for a full run. (Right this minute it's being workshopped in India.)

Possibly this sounds simplistic and dumb and ineffectual and naive. Possibly you don't like Mike Daisey because he is loud, and possibly you think he's just another Michael Moore.

I disagree with you. I never saw 21 Dog Years, his big hit, but last summer he said something that changed the way I think about my life. It was during the workshop of The Last Cargo Cult at Hugo House.

The Last Cargo Cult was about his trip to the Pacific island of Tanna, one half of which is the last place on earth where they don't have money. He traveled there to check out a place without money, in the wake of the collapse of the economy. Before the recession, people were always telling him to buy property, to stop renting (he lives in New York). "You're throwing money down a hole," they'd tell him. I have heard this very often, too, and at that time, I owned a house I was considering letting go of, and this conventional wisdom about the stupidity of renting was causing me considerable anxiety.

But Daisey had a realization: Rent doesn't pay for imagined future happiness and relief the way mortgage does, it's true. But rent pays for you to live your life. This payment can only be considered nothing in a culture where life itself is seen first and foremost as an investment that will be worthless without future returns. I live in a rented studio now. It's not that I'll never buy a house again, it's that I'm not panicking.

Activist art is a tricky business. It certainly can't work if the artist is a black-and-white thinker. Intellectually, poetically, and rhetorically, Daisey's light years beyond someone like Michael Moore, if you're looking for comparisons.