Sweet Siren Erin Jorgensen and Her Marimba Made a Record!

Erin Jorgensen is one of the only singers whose voice still, at my advanced and leather-souled age, can give me the chills. And I meant every last word of the Up and Coming I wrote about her earlier this year:

Because of an unfortunate linguistic accident, the sirens of the Odyssey (those bird-women who sing so beautifully, men will jump to their deaths to be close to them) and the sirens of the city (ambulance, air-raid) are a pair of homonyms. Because of this accident, people everywhere subconsciously think of the singing sirens as loud and brazen, busty lounge singers wrapped in red velvet. One dose of Erin Jorgensen's quiet, mellifluous voice—accompanied by her marimba, perhaps singing "My Lady Heroin" in French—will cure you of this notion. She's a tiny woman who plays an enormous instrument so sweetly, you'll want to dash yourself against the rocks. (In your drink, if not in the ocean.) She'll be playing the cozy Fireside Room in the Sorrento Hotel with Seattle's other sweetest songbird, Sean Nelson. BRENDAN KILEY 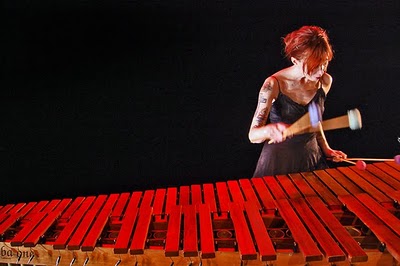 Now she had a record. Called Cet air-là. Listen to a little of it here. It's only $5 or so. If you aren't moved to buy it immediately, you probably lost your soul somewhere along the way.

(Cross-posted on Line Out, because everybody deserves Erin Jorgensen and her marimba in their lives.)