On Watching The Expendables 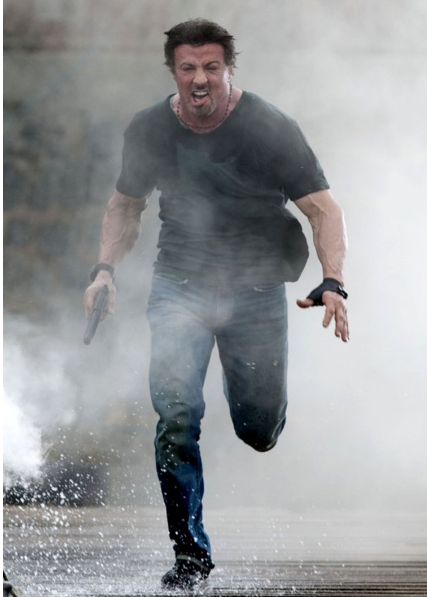 So I did not especially enjoy The Expendables (Lindy's slightly more positive review of it is here). Besides the crappy CGI gore, I had hoped for more acknowledgment that Stallone and his ilk are near the end of their careers—not an existential-dread, Unforgiven kind of movie, but at least something that didn't continually try to scream "THEY'RE BACK! BETTER THAN EVER!!!!111!!!." They're not physically better than ever: They're becoming old men (Stallone turns 65 next year), and one would hope that, in response to their aging bodies, their minds would get a little sharper. There was no sign of that here; Stallone is still trying to keep up with 25-year-old action stars and, in a way, his action-movie pandering is just as embarrassing as a man in his 60s trying to pick up barely legal women at a club.

About halfway through The Expendables, though, I got bored and decided to try a thought exercise. (The inspiration for this: I had a friend who thought that Elvis movies were much more interesting to watch if you pretended that they were documentaries about a mentally ill Elvis who would occasionally develop amnesia and try to embark on a new career—race car driver, diving instructor, race car driver, doctor, race car driver—in a new persona.) Since The Expendables is all about cashing in on your tired old glory, I watched the movie as though it was a meta-experiment.

Rather than playing a boring action character, each of the actors was instead playing an old character from their glory days who decided to make an action movie. Example: Stallone is playing Rocky Balboa, if Rocky Balboa had decided to try being an action star after he got too old for the ring. Mickey Roarke is playing Randy "The Ram" Robinson playing a washed-up tattoo artist. Dolph Lundgren is an expatriate Ivan Drago gunning for the spotlight one more time, Arnold Schwarzenegger plays Jack Slater from The Last Action Hero and so on. (The only exception is that Jason Statham is playing Jason Statham. Jason Statham is so motherfucking cool that doesn't ever need to act.) It made all the characters instantly more empathetic and likable. It made the movie's ridiculous plot and cheesy effects seem more tolerable—any filmgoer knows that if you're watching a movie-within-a-movie, you don't bring the same expectations to it—and it made the story behind the making of the movie much more interesting than what was going on onscreen. My thought experiment made the second half of The Expendables much more tolerable than the first.