You ought to know that the Vancouver Art Gallery has pulled together Kerry James Marshall paintings from all over the country. This is quite a big deal. Marshall is one of the great living American painters. Let's start with an epic, history-sized painting that became a classic the minute the artist finished painting it. It's called Souvenir I; it's the angel in her living room. 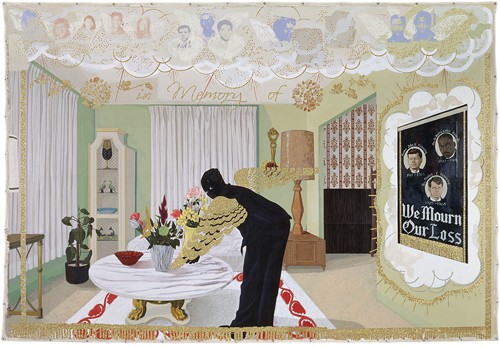 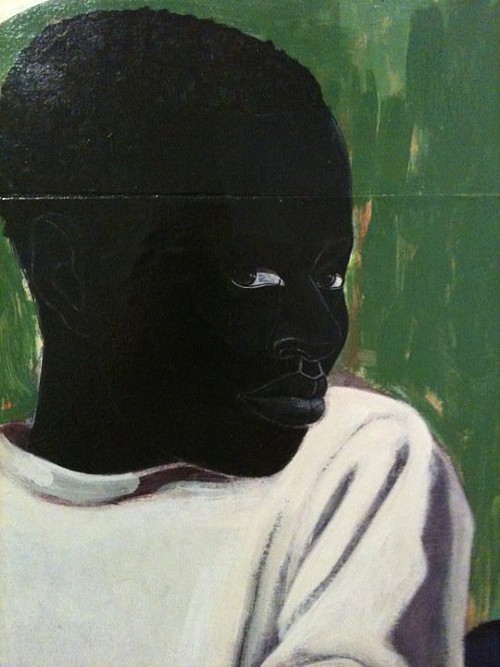 The backgrounds in Marshall's paintings—in this exhibition they range from domestic interiors like this one, to kitschily rendered beach sunsets (think: Mahogany greeting cards), to 1950s housing projects with splatters over the pretty lawns as if the future of graffiti and despair was there from the beginning—well, these backgrounds are so full of unsettling information and gorgeousness that they take up your time as you first start looking.

But it's the faces that keep you coming back, those blacker-than-black faces with the firm lines and the weight, the weight. Marshall vowed when he was young never to paint a white person, and his African Americans are not brown but the darkest possible black he can mix. This show also includes a stunning recent painting of a domestic scene in which a black couple is in bed—but the entire scene is black. It's black on black, so you can barely see them, Glenn Ligon/Invisible Man-style. The couple are having an intact private moment, but they also disappear under the weight of being seen as black. (The painting is hard to make out in photographs, but here's one.)

This was one possible future for religious painting.