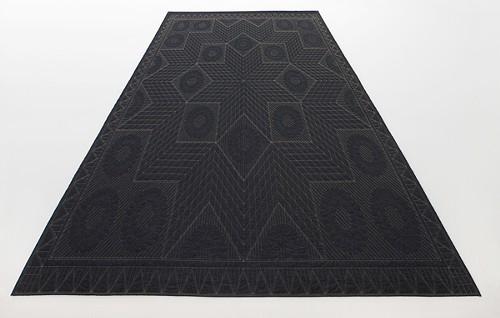 This is a denim quilt hanging flat on a wall, photographed straight on. When you stand in front of it in the contemporary gallery at Seattle Art Museum, you feel like you're standing above it, and that the wall is the floor. The world tips.

This foreshortening is not happening optically. The quilt and its patterns are physically foreshortened, built to give the appearance of opening out onto another zone—of giving the gallery wall depth.

The artist is someone you should know about: Brooklyn-based Anissa Mack. The piece, acquired last year by SAM for its permanent collection during former curator Michael Darling's tenure (when I see a great acquisition like this, I want to sob about Darling's departure), is called Broken Star, because its pattern is based on the old, traditional American broken star quilt.

Mack's work always relates to American traditions of making and crafting. (In this sense, she reminds me of 2009 Betty Bowen winner Josh Faught.) For one project, called Last Full Weekend Each September, she entered work into all 69 categories at the Durham Fair, Connecticut's largest agricultural fair, in a town near where she grew up. Her entries were standard, not arty twists. She just did what the fair asked (images). As John Motley wrote in the Portland Mercury,

Mack participates in the fair on its own terms. Her entries do not flaunt her art world credentials, nor do they attempt to reinterpret the categories from some paradigm-shifting, hyper-intellectual perspective. Instead, Mack seeks to immerse herself in tradition, to share in the same experience as her competitors. It's a refreshing approach to artwork based in social practice. Here, the artist does not assume a privileged detachment from the subject she studies; Mack situates herself in the thick of things, an artistic strategy that is sincere, compassionate, and, above all, fair.