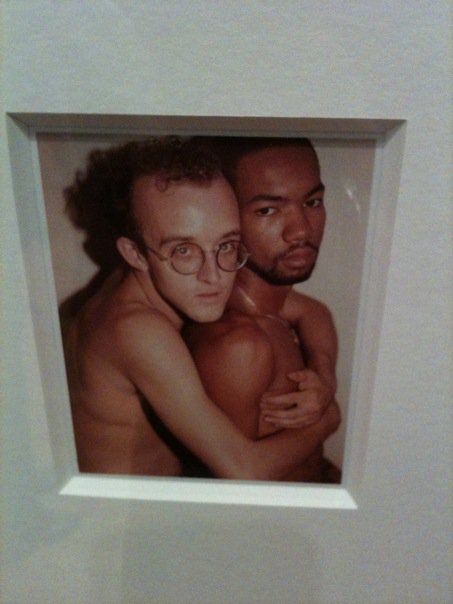 This morning I wore a winter coat, mittens, and a gray fedora as I walked to work, and the cold rain dripped off the fedora onto my jeans every time I took a step. So it seems the right time to point out that the summer exhibitions at Seattle Art Museum are closing. This Sunday is the last time to see them. If you have not seen them, you really, really should.

I've been back to the Warhol show at least five times. I will miss the haunted hallways where 20 of Warhol's Screen Tests have been playing, and I will miss it when the ads for love fear pleasure lust pain glamour death that have been wheatpasted up all over the city get postered over—because I have loved, dearly loved, the prominent sight, everywhere I go in this town, of Keith Haring holding on tight to his beloved Juan Dubose, both men naked from the waist. I can't think of the last time an art museum has so boldly disseminated a portrait of gay love all across a city, without even thinking twice about it or making an issue of the gayness of the love.

Kurt Cobain was a real person, and many people in this town actually knew him. I didn't, and I didn't relate that closely to his music, either. For that reason it wasn't easy to review Kurt, but I tried:

Kurt the art exhibition, like Kurt the person (and Kurdt the rock star, as he called himself), is complicated. One fan on opening day at Seattle Art Museum last week had been at the memorial 16 years ago; he'd loaded up his iPod with Nirvana to walk the galleries. But he wasn't satisfied. The songs, his memories, and the art weren't coming together.

Kurt is an exhibition of drawings, photographs, paintings, sculptures, videos, and sounds by artists from Seattle and around the world in response to Kurt Cobain's life, music, writings, and death. Would Kurt like Kurt? The question collapses under its own paradox: Kurt wouldn't exist if Kurt were here.

I have sympathy for the unsatisfied fan I ran into at Kurt and the others who will show up looking for some approximation of the other public gatherings around Kurt Cobain: the memorial, the rock shows, the invisible gatherings of nostalgia that happen in the minds of listeners every time his pleading/furious, pull-you-in/push-you-back-out voice plays in a bar or a cafe, especially in Seattle. Rock and art do not abide by the same rules, but they share some roots. Kurt is colder than Kurt because it is one step removed, and that step is death. Kurt knows how the story ends.