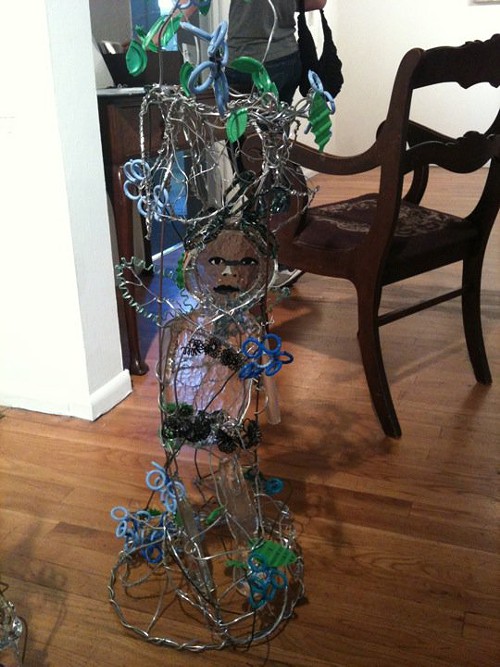 Once I had the pleasure of driving out on a country road (in Auburn? It felt like a forest) to the older home where Marita Dingus and her mother live. It's the kind of place you might say is full of spirit, if not full of spirits.

There were chickens in a coop outside (this was before chickens were cool). Marita cooked pancakes in the small kitchen, and showed me rooms chockfull of the found materials—fabric strips, wires, sheets of metal, corks, plastic, anything, really—that she reanimates into figures like the ones on display at Francine Seders Gallery through Sunday. (You can see a glimpse of their house on Dingus's web site, which is a little janky.)

In this show, in which she's paired with Juan Alonso (he makes richly layered, almost gothic abstractions), Dingus presents two kinds of works: babies and baskets. The babies are a continuation of a series of works she began a few years ago with a show at the Museum of Glass in Tacoma (which also included her giant Buddha As An African Enslaved, which will be paraded through the streets of Tacoma as part of the 2010 Race & Pedagogy National Conference in October at the University of Puget Sound).

She paints faces on slabs of glass, and she wraps materials together, then hangs her babies on the walls and from the ceiling. Beneath them are babies suspended inside webs of wires, or along the curve of a basket. Most of these are less iconic than many of her past portraits, more individual. Some seem to have distinct personalities and vulnerabilities, even while they're hanging there limply. Others don't feel like babies at all, they have such strange and otherworldly gravity. They are all reincarnations.