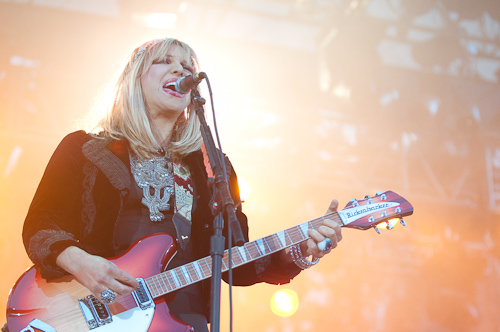 After a discouraging report from Hole's "End Session" yesterday, I was feeling fairly certain we'd be in for "Psycho Mess Courtney" at Hole's Mainstage performance. (I think about half the crowd was hoping to gawk at a trainwreck, while the other half was hoping they'd really rock.) But, man, was I wrong. Hole nailed it. Courtney Love talked a bunch of crazy shit, of course, but it was brilliant, funny, sharply referential shit. And her singing voice was raw and powerful, cracked and damaged, able to turn from exhausted croak to purgative howl on a word. (Her four-piece backing band was just fine.) It was a reminder that, before she was some tragic mess on Twitter, she was a wildly charismatic woman on stage—and she still can be.