We get a bunch of magazines mailed to us here at The Stranger, and we really appreciate them—magazines, done right, are irreplaceably fun objects—but we don't often review them. Let's try to amend that.

Name, Volume, and Issue Number of Publication: The Believer, issue # 74.
Price: $8.
Contents: Among other things, we have Jonathan Zwickel's very long and very good interview with Weird Al Yankovic, a discussion of Roland Barthes' Camera Lucida, two new poems, and a heartbreaking account of the BP oil spill.
How's The Believer Doing? Man. Who would've thought The Believer would still be publishing in 2010? I was so excited when it launched, but I was positive it would maybe see ten issues before folding. It's still a high-quality publication. My one issue with The Believer is that it maybe has too many returning columns every month. There's the humorous advice column "Sedaratives," Jack Pendarvis's "Musin's and Thinkin's," a handful of reviews, Nick Hornby's awesome "Stuff I've Been Reading" column, and Greil Marcus's supremely dull "Real Life Rock Top Ten." Sometimes it feels like the original reporting is getting squeezed out to make room for all the returning features. But most of the returning features are a lot of fun. Paradox!
Is It Worth it? Absolutely. 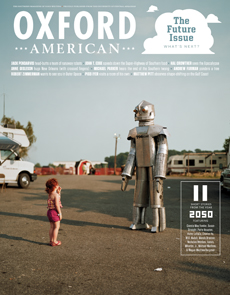 Name, Volume, and Issue Number of Publication: Oxford American # 70: The Future Issue.
Price: $5.95.
Contents: There are 11 stories supposedly 'beamed in' from the year 2050, a marvelous long poem about Buckminster Fuller (the stanzas are in the shape of geodesic domes), a continuation of Jack Pendarvis's (him again!) monthly column, and a look at the future of the space race.
How's Oxford American Doing? It's a really satisfying magazine, with in-depth looks at each issue's theme. It seems to be on course.
Is It Worth it? Absolutely.

Name, Volume, and Issue Number of Publication: The Old Farmer's Almanac 2011.
Price: $5.99.
Contents: Tide charts, weather forecasts, eclipse calendars, zodiacs, gardening advice, and a bunch of weird, unsubstantiated factoids. (Did you know that we are on the move on "Elevated Walkways" and "Pogo Sticks"? That "Trashion" design, featuring discarded audio cassettes and rusty nails, is a hot trend? That the "number of people who pray" is 9 out of 10? It's all, apparently, true!)
How's The Old Farmer's Almanac Doing? Hard to say. I mean, I guess it's the same as it always is, but it just feels kind of like an agrarian Reader's Digest without the long stories and with an added bit of pagan earth worship.
Is It Worth it? If you're into remnants of ye olden days, then sure.