The Best Legs in Seattle Are Leaving—Early? 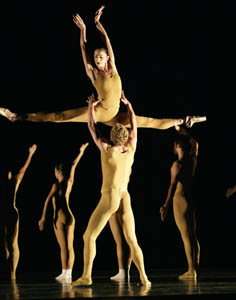 Ariana Lallone is leaving Pacific Northwest Ballet at the end of this season after 24 years with the company. She is spectacularly long-limbed—the woman is 6-foot-5 on pointe—but she is also extremely expressive and unusual.

I've always liked her better than the patrician Patricia Barker, the longtime PNB ballerina whose retirement was the cause of approximately three million appreciation parties and performances. What gives? No tribute to Lallone?

And is she being pushed out a year early? What's this in the fine print of the press release?:

In a letter read to the Board, Ms. Lallone said "Although it was my wish to take my final bow during the 2011-2012 season, I am extremely grateful for the 24 years that I have been able to perform with PNB. You have provided me with the opportunity of a professional career that has been more of a fairy tale and dream-come-true than anything I could have imagined."

Harumph is what I have to say.

I hope I get to see a lot of her at tonight's performance.

Full press release on the jump.

*This post has been updated. Two notes: First, Lallone specifically asked that word "retired" not be associated with her leaving, so I've cut it from the title as a courtesy. Second, I will not get to see her at tonight's performance because she's not dancing until this weekend.

Seattle, WA — Pacific Northwest Ballet Artistic Director Peter Boal and Chairman of the Board Aya Hamilton have announced that principal dancer Ariana Lallone will be leaving the company at the end of the 2010-2011 season, following a 24-year career with PNB. The announcement was made during this evening’s Board of Trustees meeting.

“On behalf of the board of PNB, it is with mixed emotions that we acknowledge Ariana's final season at PNB,” said Ms. Hamilton. “Ariana is an extraordinary dancer, an earnest PNB advocate, and a true friend. We hope all of her many admirers will be with us throughout the season as we look for ways to honor Ariana’s glorious career and celebrate her truly unique imprint on PNB.”

Ms. Lallone joined the PNB company in 1987 (after a year in Pacific Northwest Ballet School), and very quickly made her mark as a dancer with a “singular style,” as former Seattle Post-Intelligencer writer R.M. Campbell noted in a 2007 profile. “Start with her height — 5-foot-11, rising to 6-foot-5 on pointe — then proceed to her intensity, dramatic temperament and individuality as she speeds across the footlights. She operates on a scale different than most dancers — larger, longer, more expansive. Her profile could have been sculpted in marble, and her line is so extended, it seems to stretch to infinity.”

“Ariana Lallone is at the very core of Pacific Northwest Ballet,” said Mr. Boal. “As perhaps the most admired and identifiable presence onstage and off, we know that no one will match her contribution to our company. Personally, I am proud to call Ariana a friend and to have worked so closely with her, bringing over 20 new roles to her repertoire during the past six years. At home in both the lyrical romanticism of Balanchine's Emeralds and in the grounded pathos of Duato’s Jardí Tancat, Ariana’s range as an artist has been tremendous. Looking back on a career filled with memorable performances in the finest classical and contemporary roles, it was difficult for me to make the decision to have this be her farewell season. Over the next nine months, Ariana will dance roles which she defined for PNB in works by Kylian, Duato, Tharp, Morris, Stowell, and Balanchine. Her career as a unique and accomplished ballerina is one for us to celebrate: Her fans are many for her onstage contributions, but she also deserves recognition for her tireless offstage advocacy and devotion to PNB. We will savor her performances this season and salute the extraordinary career of this powerful artist.”

In a letter read to the Board, Ms. Lallone said "Although it was my wish to take my final bow during the 2011-2012 season, I am extremely grateful for the 24 years that I have been able to perform with PNB. You have provided me with the opportunity of a professional career that has been more of a fairy tale and dream-come-true than anything I could have imagined."

Ariana Lallone is from Woodland Hills, California. She trained at the Rozann-Zimmerman Ballet Center (now known as California Dance Academy) in Chatsworth, CA, and on scholarship at Pacific Northwest Ballet School. She joined Pacific Northwest Ballet as an apprentice in 1987 and was promoted to corps de ballet in 1988. In 1993, she was promoted to soloist and became a principal in 1994.

In a 1998 profile of Lallone in Dance Magazine, choreographer Mark Dendy, who created leading roles for Ms. Lallone in Les Biches and Symmetries, is quoted as saying “Right away I knew I wanted to work with her, because her spirit is there. I was struck by her face and her eyes. She's got that marvelous bone structure, that beauty that comes from many incarnations — you've worked to acquire that beauty. There's an old spirit there with some deep knowledge. She's a very mature performer, very much at home onstage. In the Nacho Duato piece [PNB's Jardí Tancat] she's an individual, yet becomes one of the ensemble. That's not anything I had thought of using her for — as a member of the group — and yet she does that equally well, and that's stunning for me."

In the same Dance Magazine article, Francia Russell (PNB founding artistic director) described Ms. Lallone succinctly: “She dances with her heart and soul as well as her mind and body.”

In 1997, Ms. Lallone performed the solo from Val Caniparoli’s Lambarena at the Benois de la Danse Gala in Warsaw. She also performed the role of Hippolyta in the BBC’s 1999 film version of PNB's production of George Balanchine's A Midsummer Night’s Dream, filmed at Sadler’s Wells Theatre, London. In 2005, she performed with Peter Boal and Company.