When Connie Watts was recovering from a brain injury, she made this monumental sculpture. 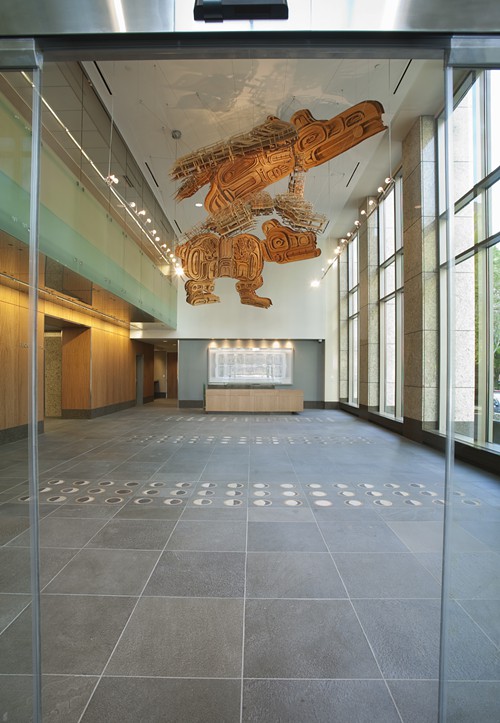 The Vancouver, B.C. artist says creating it helped her recover. And then she gave it away—to the collection of 4Culture (King County), which saw that it was well-placed: It hangs now in a new lobby at Harborview Medical Center*, where it's in a position to stand witness for other people in pain. (The architects, loving the sculpture, even partly designed their lobby around it.)

Titled Vereinegung (or "unification" in German), the sculpture is already in the lobby (on the corner of Ninth Avenue and Jefferson Street). Its dedication will be Saturday October 9, 2-4:30 pm. Native dancers and singers will celebrate with performances.

Watts, originally from the West Coast of Vancouver Island, is of Nuu-chah-nulth, Gitxsan, and Kwakwaka’wakw ancestry. To hear her talk in her own voice about the piece, dial 206-296-4848, press 1, and then press 122. Or hear her interviewed on First Nations Radio. More info here.

*The photograph hanging below the sculpture in the picture is Isaac Layman's giant ice-cube tray.