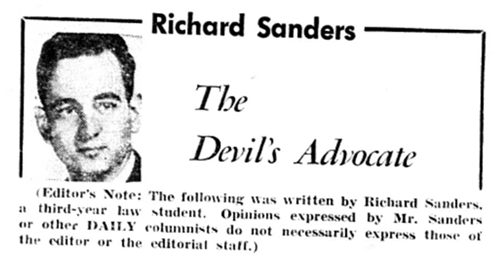 Today is the last Devil’s Advocate. It has been a good experience to talk with my friends—my readers—about the social forces that will shape their lives and mine. My only regret is that I could not have said more impressively what I know to be true and fear not to be well understood. I am not a journalist and sometimes the words of conviction come only with difficulty. At any rate, what is one man’s conviction set out in pen and ink? It is a small thing at the very most.

In the final analysis, the Devil’s Advocate has been a failure if it is to be measured in column inches or even in personality. It will be just empty parchment yellowing in an archive breaking at the slightest touch. Paper, as men, can only live so long. Only ideas may have immortality.

Who would have suspected that from the Dark Ages would finally come the dawn. Sometime the spark of an idea must be carried for generations in the minds of a few so that when the time comes the conflagration will light the sky. So, my readers, it is up to you. It is on your shoulders that your fate rests—as well as the fate of others.

My message has been a simple one: man deserves to exist for his own sake. We are born as an individual and die as one, no matter what social institutions stand between the cradle and the grave. To be an individual implies to me that a man should be the master of his own life. That he should chart his own course—for better or for worse—because, simply, no one can do his living for him.

To be sure, he can cooperate with others along the way, but the choice is still innately his—if he only has the freedom to make it. And he can make it if he is free from the force of his peers—even when they organize themselves into a government. Government can protect men form the thieves of liberty or it can be one of them. I fear the latter course will prevail.

But oh the generalities! During the past two years I have tried to explain it in every way I know how, I have said it until I’m hoarse and written it until my typewriter ribbon is in shreds. And it has been pretty lonely too. It is I who lacks the tongue or they who lack the ears? The result is the same.

Oh if I could just sit back and let nature takes its course! I wish it would be easy for me to set aside thoughts that the only vaguely decent society on the face of the earth was sowing the seeds of its own destruction, but it is a thought so persistent that it throws me to despair. By failing to live out my life in numbness perhaps I, like my society, have joined that futile dash of the lemmings into the sea.

But—I ask you—is there really a choice? Can surrender ever be an alternative to survival? The fight must continue if not in numbers, if not in might—at least in right. In a world gone mad the truth is a haunting companion. It keeps one honest when the applause goes to those who are not; it keeps one sad when those in ignorance can rejoice. The truth is a jealous mistress who withholds her revenge until it can be complete.

Those who know the truth must satisfy themselves with being the Devil’s Advocates of a society which values evil rather than virtue.

Now this is hardly the tact of a political recruiter. For who will enlist in an army guided only by the twilight of its struggle. To have asked the question is to have given the answer. Those in the army to break man’s chains fight for principal even if victory is to be denied them. There is no other way.