I Am Sorry, or Reckless Whiteness Rides Again 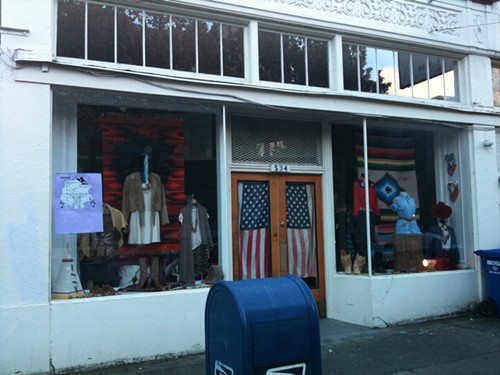 Two days ago I walked by an unmarked storefront on Summit, then performed two separate acts of laziness and blindness.

One, I assumed the fashion display in the window—a cowboys-and-Indians theme (I use the word "Indian" intentionally, because that's the trope)—was an act of appropriation on the part of white people.

Two, I posted here a poll, carelessly asking whether tribal fashion in general is racist—abstracting the issue rather than looking into the specifics.

I am genuinely sorry. I failed both as a journalist and as a white girl committed to examining white race politics.

Hi all, my name is Adria Xuala Garcia, and the window display in question is mine. I'm a half Taine/ Seminole Indian & half Irish . The window reflects my personal heritage as a first people and people who settled here people who actually are cowboy and ranchers. Those flags belonged to my grand father, who's family settled the west and who were all Soldiers ( family fighting in every American war ). The window is meant to reflect how I feel , a child a two cultures ( native american barely ever represented ). The headdress is a piece traded at a pow wow , that I danced in , given to me as thanks.
I AM NATIVE AMERICAN and COWBOYS .
Not Racist !
I did this to reflect the life of one native women ,finding her identity . To show people when I where my headress , I am proud.

When white people make racist mistakes, we usually follow up by making the issue, once again, about us. Most often we deny it. We almost never get beyond these two statements: "I'm not racist!" or "This isn't about race!" And both of those statements, in addition to being conversation-enders, are self-centered and dismissive. They're also convenient. You don't have to deal with a problem if you insist it doesn't exist.

But it does exist. White race politics have been stalled in denial for years. I was once formally accused by a (white) student of mine of being racist for admitting in class that I am racist in the context of a conversation about black artists coping with white racial cluelessness. It's that kind of tautological logic we're stuck in. And it's up to us to work to end it with acts of imagination.

This week, I failed to commit a basic act of imagination. In my haste to put people in neat categories and start a discussion without doing any actual work toward making sure the context was at least informed, I didn't even consider the possibility that what is literally a mixed-race display actually represents a mixed-race personality and consciousness. (When the previous store, Spencer Moody's great Anne Bonny, closed, I talked to two white guys about the future store, and I mistakenly assumed they were the owners.) Not okay.

And you'd think I'd be more thoughtful: All this is going on while I'm reading Coll Thrush's 2007 book Native Seattle: Histories from the Crossing-Over Place. I'm only about a hundred pages in, but I think that if the book has a single message, it's that the story of Native Americans in Seattle is massively mis-told as a ghost story—as a series of steady and/or sudden erasures, when the truth is that native people have been part of this town all along, and in fact the race politics of early Seattle were far more nuanced than they are today.

Take the amazing story of Ling Fu, told on page 64 of Native Seattle:

Sometime in the 1870s, a Chinese man named Ling Fu was brought before Judge Cornelius Hanford in Seattle's courthouse, accused of not having the proper citizenship papers. Facing deportation, Ling Fu argued that he did not need to carry papers: he had been born on Puget Sound. To test him, Judge Hanford quickly shifted his inquiry into Chinook Jargon, which had become nearly as common as Whulshootseed or English in Puget Sound country. "Ikta mika nem? Consee cole mika?" (What is your name? How old are you?), he demanded of Ling, who in turn replied, "Nika nem Ling Fu, pe nika mox tahtlum pee quinum cole" (My name is Ling Fu, and I am twenty-five years old). Clearly surprised, the judge responded, "You are an American, sure, and you can stay here." He then turned to the bailiff and decreed, "Ling Fu is dismissed."

The little store on Summit Avenue East is called Indian Summer, and it is having its grand opening this weekend. I'll be there, and I hope Garcia will let me in.

As for the rest, I have yet another reminder that I have my work cut out for me, and I'm still committed to doing it.