Last night, Dino Rossi, Suzan DelBene, Adam Kline, Ed McKenna, Edsonya Charles, and Bill Gates Sr. were all in the same room together for a candidates meet-and-greet and initiatives debate in Columbia City. No shit. Well, Rossi actually left before the other candidates arrived, because, according to his press secretary, he's super-duper busy.

In his 15 minutes, Rossi swept in like a movie star, clip-art hair and all, mingled for maybe two minutes, posed for photographs, and delivered a speech about his Italian immigrant grandparents, how he grew up thinking everybody drank powdered milk like him, how he had to wax floors at the Space Needle for money, but eventually ended up on the dean's business list at his alma mater, Seattle University. He could have just run one of his campaign ads instead.

Congressional candidate Suzan DelBene and incumbent state senator Adam Kline (D-37), on the other hand, behaved like meet-and-greet pros at the event (hosted by Urban Enterprise Center and Sea Beez). They were everywhere in that bookstore on Rainier Ave., talking to people, answering their questions. "The polls are being really generous, but we have to keep ringing those doorbells, keep canvassing," DelBene told me. "The economy is still the biggest concern."

Gates Sr., who BTW, is really tall, and spoke in support of I-1098, was also pretty chatty, except for the times he had trouble hearing what people were telling him. But you can't really blame the guy; he's 84. 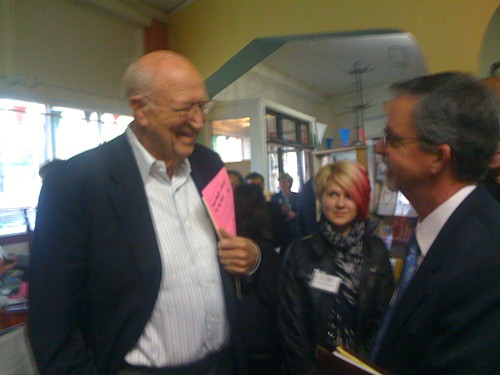 I asked Seattle Municipal Court challenger Ed McKenna how it felt to be in the same room as his opponent, current Municipal Court Judge Edsonya Charles. "Oh I didn't even know she was here," McKenna said, adding, "We are professionals, we don't let that bother us." So I asked McKenna if the current controversy surrounding his relationship with a PAC of DUI lawyers was bothering him. Or his campaign. "The misunderstanding is unfortunate," he said. "We are required to run on our credentials and I think it's unfair that my supporters are being attacked."