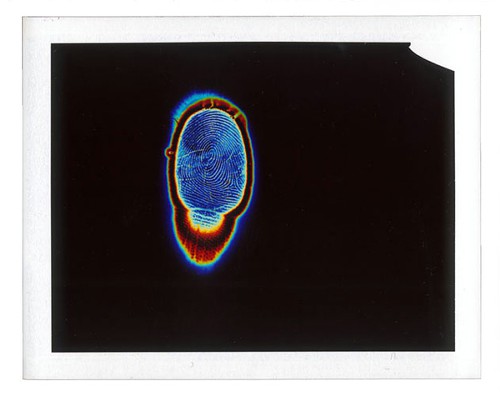 In Vancouver, B.C., artist Jeremy Shaw's video of two teenage girls fistfighting at a party (7 Minutes), the violence is slowed down, spied rather than seen outright, and set to an almost hypnotic original song. Two altered states—one fueled by blinding adrenaline, the other by droning, moaning music—are layered on top of each other. Watching is mesmeric.

7 Minutes showed at SAM in 2008; now he has a small show of sculpture, photography, and video at Lawrimore Project called Single Channel Higher States. He's once again working with the premise and promise of altered states.

Austere minimalism is the foil and the reference for Untitled (Home Deprivation Study), a sculpture of the white bones of an unfinished sensory deprivation tank the artist built using an online kit. It resembles Sol LeWitt's white geometrical lattices, and evokes number one in LeWitt's "Sentences on Conceptual Art": "Conceptual artists are mystics rather than rationalists." 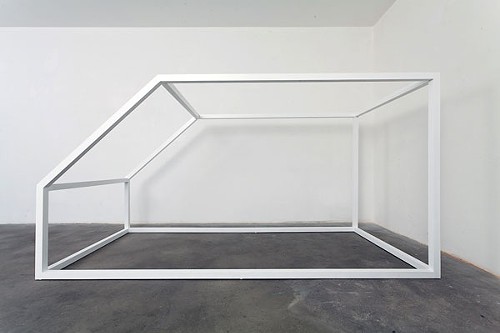 A blown-up image of a tiny, soft, fuzzy square of white acid, printed on a white background (and hanging on a white wall), is called Single Hit of White Acid (After Malevich, for Optimists). Was Malevich an optimist? I suppose that depends on whether you love or hate his white and black squares, some of the earliest examples in Western art history of pure, almost religious abstraction—whether you think they point forward or act like monolithic gravestones for art in general. (I'm in the camp that thinks he was a great optimist.)

In the lower-left corner of a video showing flickering green lines across a black grid, there's a stack of text: the name of the song and artist being represented—like an MTV video. But there isn't any sound, and the green flicker looks medical. Shaw is taking soul songs and trying to see whether their vibrations alone, presented visually, provide any inspiration. What is it about these songs that people like so much—do the songs have a shape? Polaroids next to the video screen depict the "aura" of the artist's fingerprints while he was listening to the soul songs. The Polaroids were made using a technique called Kirlian photography, where you send a jolt of energy through something while it's touching photographic paper in order to create the image.

What all this reminds me of is Seance: Albert von Keller and the Occult, the show of late 19th- and early 20th-century paintings at the Frye, in which science and mysticism dovetail. Shaw seems to position himself as a white-coated lab scientist—or at least it's easy to imagine him this way, carrying out these experiments in building, measuring, and recording. In a 2004 project, DMT, he made video and text portraits of subjects while they took the fast-acting hallucinogenic drug.

The DMT videos (find them here) show the subjects, dressed in white and on white beds, during their brief (6- to 20-minute) high; the texts that appear on the screen are the words they used to describe the experience later. (There's also a book with the texts over pictures.) Shaw documents the gap between the memory and the experience, in addition to the gap between the regular state and the high, during which eyeballs rise up into the head and the eyes show only white. Gaps, whiteness—it's perfect, then, that when you look up at the high ceiling in Lawrimore Project's new space, what you find is a stark white fluorescent rectangle.