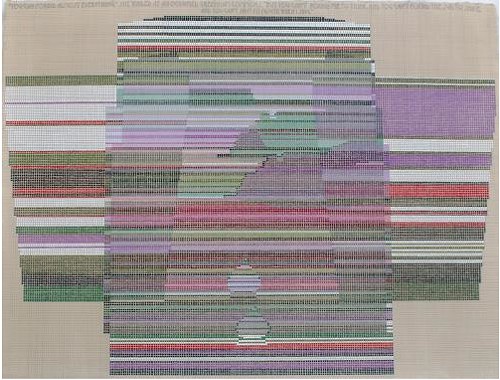 Female heroism is undersung, but Ellen Lesperance is determined to sing it—not only so it's not forgotten, but with the hope that it might be catching. Go to her web site, and you immeditely hear the chants of the Women's Peace Camp at the nuclear testing site Greenham Common.

Look at her paintings, outside the elevators at Seattle Art Museum, and you see they're dot patterns in a grid on brownish paper: patterns for sweaters that, when worn—and however soft—might transform the individual wearer. Lesperance, originally from a hippieish family in Seattle's U District and now living in the latter-day utopic city of Portland, is both wedded to and critical of collective idealism. She knows how it can hollow out over time, and how dogma or compromise can take over. But she plainly still believes in the sheer power of individual action. How to make it happen? That's the spur of her work.

Lesperance was celebrated last week as this year's Betty Bowen Award winner. She's extremely deserving, and a timely choice, too. Her patterns are prods toward personal politics in an election year that can feel hopeless, when Tea Partyers are pushing the line of regression hard. Lesperance's work is inspiring, even just in her titles, which are expansions on historical data and real quotes: "You Can Forbid Almost Everything," She Wailed at an Occupied Greenham Commons. "But You Can't Forbid Me to Think. And You Can't Forbid the Sun to Shine. And You Can't Shut My Mouth When I Sing," We Will Cover Your Fallen Body, Beth O'Brien, and Tell You That It Was Not In Vain. The Forest at Eagle Creek Remains! Let It Echo Your Most Valiant of Names: Horehound... Horehound.... 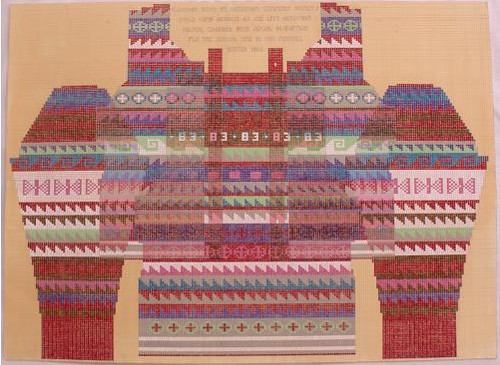 The tone of inspiration has become pretty rare in art. It's fairly rare in the culture at large. Radical acts may remain, but the rousing spirit of radicalism is hard to find. In Lesperance's voice, it sounds almost medieval ("your most valiant of names"). At SAM, only paintings are shown, but Lesperance's art actually includes everything from the archival photos she starts with to the titles she writes to the pattern paintings that hang on the wall to the sweaters she wants to be worn. One of her own inspirations was visiting the Asylum for Radical Feminism in Santa Fe, which she found harrowing: The feminists were very few in number, and essentially impoverished. But they had stories to tell; that's where she learned of Greenham Common.

"It's okay to stop there, at just art shown in a vitrine," Lesperance told me last week. "Because that turns these things into artifacts, gives them cultural power. But to wear them—can you imagine that would transport you into an ideological stance? Because that's all it takes, is just for you to imagine that."