The other day I once again urged Slog readers to vote No on I-1100, arguing that Washington's state and local governments simply can't afford the revenue hit in the midst of such a severe and prolonged fiscal crisis. But I-1100 isn't the only measure on the ballot impacting state and local tax revenue, and so with the election just days away, I thought I'd take the opportunity to refute some of the lies we've been hearing from politicians, political ads and editorial boards, by illustrating Washington's structural revenue deficit with a few simple charts.

The first thing to understand is that contrary to what you might have read in the Seattle Times op-ed pages, Washington's current budget crisis is not a result of out of control government spending. It just isn't. In fact, relative to the size of our state's economy, state government spending has actually fallen slightly over the past 15 years, while state tax revenues have suffered a precipitous drop. 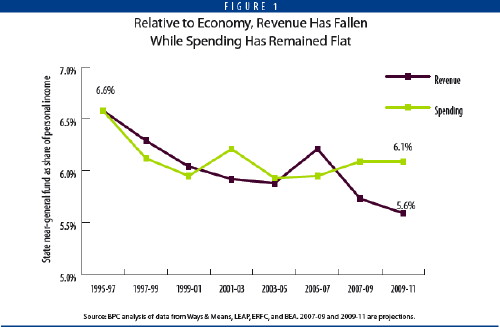 What you see charted above is a 15-year snapshot of Washington state's decades-old structural revenue deficit, a deficit caused not by profligate spending but rather by our over-reliance on a 1930's-era sales tax.

The problem comes down to simple math: Washington relies on the sales tax for 56% of general fund revenues, one of the highest ratios in the nation, but the sales tax base itself is gradually shrinking over time, representing a smaller and smaller portion of our economy. For example, the goods and services subject to Washington's sales tax represented 32% of total consumer spending in 1959, but only 26% by 2000. And falling.

And when your tax base shrinks, you really have only three options: expand the base, raise the tax rate, or shrink the role of government in our economy and society. And despite all the non-contextual Republican rhetoric about state government growth in dollars, Washington lawmakers have largely chosen the third option in recent years, steadily shrinking both revenues and spending as a percentage of our overall economy.

Of course, this chart only represents a 15-year snapshot of state general fund spending and revenue; what really matters is the total impact of state and local taxation on Washington families. We've all seen our sales, property, gasoline and alcohol taxes inch up over the years, so surely we must be paying more for government now than ever before, right?

This graph tracks total Washington state and local tax "burden" (taxes as a percentage of the economy) between 1978 and 2008, relative to the national average, and it's plain to see that we've simply fallen off the chart, plummeting from 10.4% in 1994 to 8.9% in 2008... good for a drop from 17th to 35th place nationally. And these aren't cherry-picked state OFM numbers—although OFM reports a similar decline in both percentage and ranking. No, these numbers are culled from the conservative Tax Foundation, the same anti-tax, anti-government "think tank" that Tim Eyman has long cited.

And the data only goes up to 2008, so it doesn't even reflect the impact of the Great Recession, where in Washington state, consumer spending plunged in advance of incomes, and has failed to recover as fast. Not so good for state and local governments that rely so heavily on the sales tax, huh?

Counterintuitive as it may seem given the rhetoric we've been fed, Washington's state and local government has been steadily shrinking as a percentage of our total economy for at least the past fifteen years. And since economic growth is the metric that most closely tracks growth in demand for government services, that is the number that really counts, not the size of the budget in dollars. Again, I know that's counterintuitive, as we've been led to believe that the poor consume the bulk of government services, but think about it: the wealthier we are, the more we consume, and the same is true of the kind of commodity services government provides, like roads, schools and other public amenities.

Citizens of wealthier countries simply demand more and better services and infrastructure from their government, and are better able to afford it. Don't take my word for it; just look around the world. And that's why the wealthier the society the higher the cost of government per capita.

Which brings us to my final chart, for even by the anti-government crowd's favorite metric—population plus inflation—Washington state taxes are either flat or falling, depending on which inflation index is used. 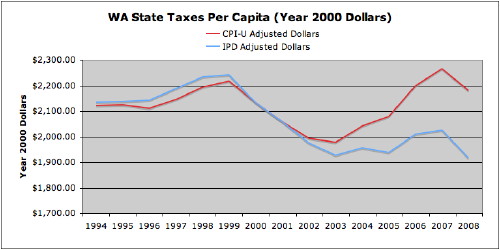 Again, this chart does not reflect the dramatic drop in per capita tax revenue due to the Great Recession, but the long term trend is clear: adjusted for the CPI, per capita state taxes remained relatively flat over a 15-year period in which Washington experienced explosive economic growth. But those same tax revenues actually purchase substantially less government services per capita in 2008 than they did in 1994, due to the fact that the cost of government tends to rise faster than the cost of consumer purchases.

Why? Well, the anti-government crowd might point to the allegedly inherent inefficiency of the public sector, but the truth can actually be summed up in one word: productivity.

See, the same sort of factors that lead to productivity gains in consumer products and services, and thus lower consumer prices—factors like technology and outsourcing—simply aren't applicable to governments and the high-skill, labor-intensive services they tend to provide. For example, you can automate and/or outsource a factory, but not a classroom, and the only way to substantially increase the productivity of firefighters or police officers is to either pay them less or put fewer of them on the street. (It's for similar reasons that college tuition, both public and private, has consistently risen at twice the consumer inflation rate for years.)

The takeaway from all this? Washington suffers from a structural revenue deficit that has been steadily shrinking the size of state and local government for years, both as a percentage of the total economy, and on a per capita basis adjusted for inflation. Today's tax revenues simply purchase less government today than they did fifteen years ago, and unless we make significant changes, fifteen years from now our tax revenues will purchase even less government still.

And yet, despite all this, there are four initiatives on the ballot, 1053, 1100, 1105 and 1107, that would directly make our structural revenue deficit worse, while the only initiative that attempts to address the problem, I-1098, seems destined to fail.

Keep that in mind as you fill in your ballot.