Go Ahead, Check Our Math (Please!), But Looks to Us Like Charlie Wiggins Has a Plausible Path to Beating Blabbermouthed Polyamorous Nazi Impersonator (and Supreme Court Justice) Richard B. Sanders 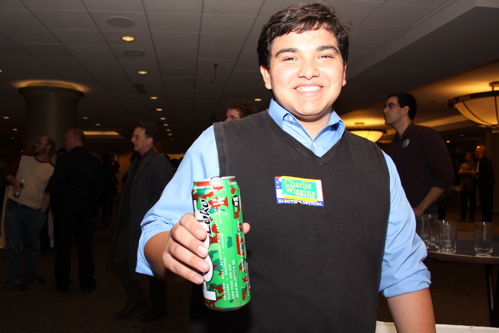 Right now Justice Richard B. Sanders is winning statewide by 51 percent to 49 percent, with just over 23,000 votes separating him from challenger Charlie Wiggins.

But in King County, as noted earlier, Wiggins is clobbering Sanders, 56 percent to 44 percent. And, as noted even earlier, we're not getting all of King County's results tonight.

King County was projecting 68 percent turnout (that's 720,000 total votes) before today, and actual turnout could end up being higher based on reports of very high voter participation here. But, say the previous 68 percent turnout projection is correct. Only about 373,941 ballots have been counted in King County so far, and if exactly 720,000 votes end up coming in, and if they break the same way they've broken in tonight's results (56 percent to Wiggins, 44 percent to Sanders), then Wiggins will pick up 193,793 more votes in King County and Sanders will pick up 151,055.

Bottom line: Wiggins could win. He has the math. Because we just did the math for him. And we don't think we're wrong. (But also we're walking around the Westin toting a Watermelon Four Loko.)

UPDATE: Well, yeah, Watermelon Four Loko. The SECB wasn't paying close enough attention to this, which shows Spokane County—where Justice Sanders recently showed up to headline a Tea Party rally—holding about 110,000 ballots that still need to be counted. So far, Spokane County is breaking 56-44 for Sanders, which means he'll gain a lot of votes there as the counting goes on in Spokane, cutting down significantly on Wiggins' ability to gain votes overall.