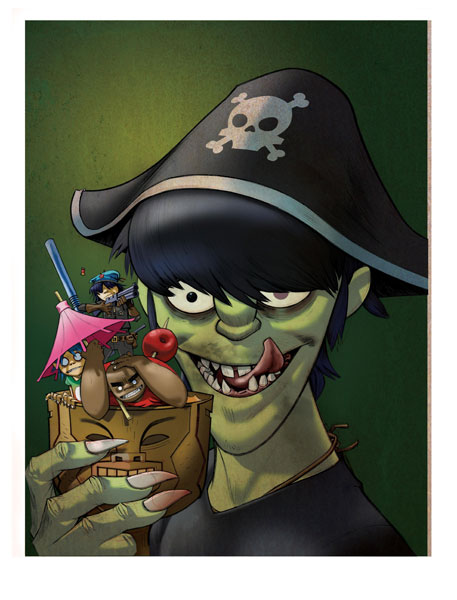 Last night, Damon Albarn's cartoon band Gorillaz took Plastic Beach, their most cohesive and best album to date (even without a single as big and defining as "Clint Eastwood"), and exploded it into one of the most ambitious live concert revues I have ever seen. At any given time, underneath a giant video projection screen and light-up letters spelling the band's name, there were a couple dozen musicians onstage (a friend said the onstage total with crew numbered over 100), including an all female string section in nautical attire (a popular look among the audience as well), an all male brass band, a Syrian string and percussion ensemble, four back-up singers, two drummers, two keyboardists, and the Clash's Mick Jones and Paul Simonon on guitar and bass. Guests included Bobby Womack, De La Soul, Little Dragon's Yukimi Nagano, Kano, Bashy, and Bootie Brown. For a cartoon band, Gorillaz put a lot of stock in bringing out the real musicians. (Surely they must know this can all be done with computers these days?)