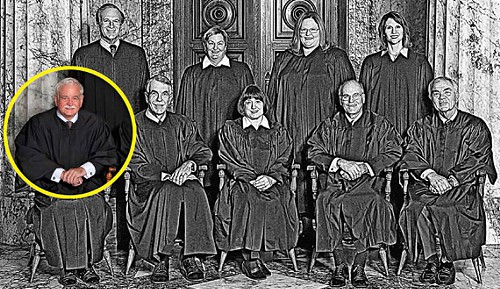 The race between State Supreme Court Justice Richard B. Sanders and challenger Charlie Wiggins tightened considerably today as King County counted about 71,000 more ballots. With more than 130,000 ballots still on hand and waiting to be counted in King County, and with votes here breaking 58-42 for Wiggins, it looks like Wiggins will take the lead after King County reports tomorrow.
Right now the race is so close—with only one percent, or 1,820 votes separating the two candidates—that an automatic recount would be triggered if this were the final tally. But it won't be.
The math is getting clearer and clearer (as evidenced by Justice Sanders' recent plea for donations so that he can try to scrape up more votes in counties all over the state). If King County keeps breaking this strongly for Wiggins, and there's no reason to think it won't, then Wiggins wins—and probably by a margin well outside the automatic-recount-triggering threshold of 2,000 votes. (Just like michaelp, who called it first, has been telling you since Friday.)
Wiggins' campaign consultant, Christian Sinderman, told me he's aware of Justice Sanders' efforts to rustle up more votes, but that Justice Sanders himself has said a result giving Wiggins an outside-the-recount-margin win (a win by more than 2,000 votes) would be hard to reverse.
If need be, the Wiggins campaign will pursue similar vote-rustling efforts around the state, Sinderman said, but he added: "I think we will see a lot more movement in the next day or so and that will tell us how aggressive we need to be."
That, by the way, was before today's results from King County. After the King County results dropped, Sinderman told me he now expects Wiggins to finish the race with a lead of well over 4,000 votes.
That math seems hard to dispute.
Wiggins will win this election—unless Wiggins' people stupidly fall asleep after tomorrow afternoon and Justice Sanders can somehow, before the Nov. 22 deadline, find many, many thousands of votes around the state that have been rejected because of signature issues, can be "rehabilitated" so that they are counted, and, crucially, were cast for Justice Sanders the first place.
Reading all this and wondering if your ballot has been counted yet? Click here.
(P.S.: Expect Justice Sanders' lead to widen a bit as the evening goes on and a few other counties around the state report their results. That won't change the overall math, though. When King County reports tomorrow, Wiggins will likely be in the lead.)
The Stranger depends on your continuing support to provide articles like this one. In return, we pledge our ongoing commitment to truthful, progressive journalism and serving our community. So if you’re able, please consider a small recurring contribution. Thank you—you are appreciated!
CONTRIBUTE NOW

Rain on Your Parade Will Fulfill Your Fiendish Fantasies