Seems that Seattle is experiencing an epidemic of small movie theater closings. The Uptown, The Neptune (maybe!), and maybe old news, but new to me: Columbia City Cinema is on the ropes too. 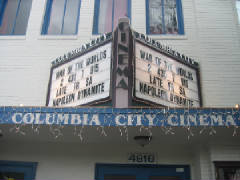 The owners of the Columbia City Cinema aren't going without a fight, though. They've decided to let the community put its money where its mouth is by offering 480,000 shares of common stock* at $1 a share (minimum purchase is 100 shares). The owners say they need to sell 50,000 shares by January 1 or they will close.

Despite the horrific font crimes being committed in their offering brochure, it's a pretty cool idea. If you live nearby and you want to still have a movie theater in the neighborhood in 2011, you can be a part owner. Capitalism!

*UPDATE: As some of you have pointed out in the comments, it's not really accurate to call this stock, as it's not an officially registered public offering and comes with some noteworthy restrictions (most importantly, there's no market for this stock, so you can't sell it). It's more like a donation with some (very small) potential for a share of profits should they ever make any. In any case, and as always, caveat emptor.

DOUBLE UPDATE! Further in the comments, the mighty fixo smartens everybody up by pointing out that the restrictions on what you can do with this stock don't make it a scam, or any less accurate to call it "stock." It's clear from their statements and brochure that they're using this as a fund-raising effort (which is what stock offerings are for), and they're not making any promises that it will be a great financial investment, but rather an investment in the life of the community.