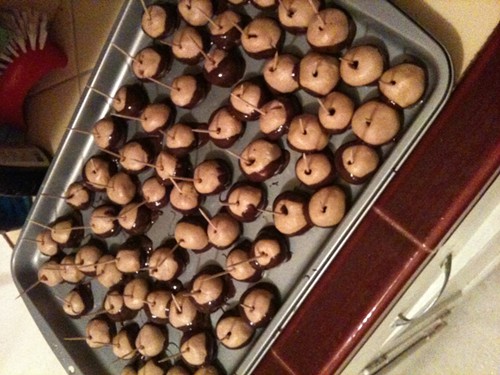 When you eat a Buckeye*, your pupils dilate, your hair curls like a cat getting comfortable, and you moan. People eat just one at a time. Do not bring it to a party unless you want to be liked.

Melt a cup of butter (two sticks). Add a pound of peanut butter (most of an 18-ounce jar) and 1 1/2 pounds confectioners sugar. (Just approximate; don't stress—the high-performance part comes later.) Mix it all up and set it in the fridge for two hours to chill. After taking them out, form them into little balls. (There will be approximately 7,000 balls.)

Now, you're on. Get a pot and pour in two cups chocolate chips and two teaspoons shortening. Melt them on relatively low heat so you don't burn them. Stick each ball with a toothpick and dip them, one by one, into the chocolate. This is the fun part. You want to get a rhythm and a flow. You don't want to use too much chocolate on each one, so that you risk running out, and you don't want to do it too slowly, because the consistency will eventually get weird. Some Zen is required. Don't worry about flinging a little chocolate.

Afterward, you're walking around feeling like you've accomplished something. Play some Smokey Robinson.

*As a child, I was taught to believe that the buckeye is a magical nut that has no purpose other than to make wolverines stark-crazy. Learning otherwise has done nothing to dissuade my loyalty to this story, as it is the story of the righteous Buckeyes and the dread Wolverines, played out perfectly this weekend.