A Critical Overview of This Week's Stranger 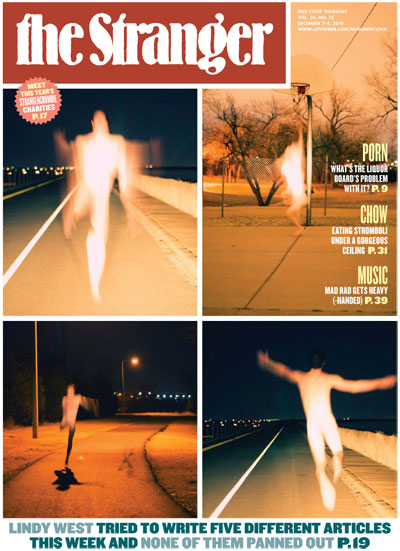 Lindy West has become a problem that can no longer be ignored. In the beginning, she was an eager-to-please intern. She had pluck, and her reviews—generally of minor, forgettable films—were harmless enough. But then Stranger film editor Annie Wagner, who was perhaps the smartest person to ever work at this intellectually fallow field, correctly sensed that The Stranger was on the long, slow path to death and left the film section in Miss West's less-than-capable hands. What we have seen in the months and years since is a classic Greek tragedy: Miss West's ego has raged unabated even as Seattle's once-great cinematic culture collapsed all around her.

The devoted fawning of anonymous wags on the internet has only served to build Miss West's self-regard. Now, at last, her once-dim talent is now entirely extinguished. She babbles like an infant, with seEEMIngly nO conTRol ovEr her OWN KEYBOard, and we are supposed to find it funny. Well, I am about to be the one to finally admit that Empress West is buck naked. For proof, look no further than this week's feature story, which is literally made up of five different stories that Miss West could not be bothered to physically finish. Have you no shame, Miss West? Have you no sense of decency? The general reading public tires of watching you wallow in the filth of your own ignorance and try to pass it off as "humor." Allow me to be the first to say it, in the imbecilic language that you can easily understand: Lindy West, you are "so over."

Speaking of women who are not funny, Cienna Madrid sings a lament in this week's news section about how Mayor McGinn cannot fulfill yet another of his "pie-in-the-sky" campaign promises—this one about keeping bars open even later. Miss Madrid nearly shatters her own spine while bending over backward to absolve the mayor of any guilt in this—blame the governor, she says, when everyone knows that the blame lies solely in the hands of The Stranger for endorsing this rotund, bearded clown in the first place. Say what you will about Joe Mallahan—and The Stranger certainly did, up to and far past the point of libel—but at least his campaign platform wasn't constructed from rainbows, unicorn tears, and moondust.

Also in the front of The Stranger this week, Paul Constant and Dominic Holden try to clean a year's worth of smut and marijuana resin off their hands by writing oxymoronically dull-yet-glowing profiles of two liberal safety-net services that will be the recipients of next week's tax shelter/charity auction Strangercrombie.

In other sections: THEATER: For what must be the millionth time, The Stranger writes a glowing review of a production by "Awesome"—yawn... BOOKS: Mudede runs amok for 900 words—unreadable... VISUAL ART: Your typical snoozefest, although Miss Graves gets points for leaving Capitol Hill... CHOW: Another lame review of another Italian restaurant... MUSIC: Didn't read... CONTROL TOWER: I do not know what a "Bi Babe" is, and I assume that I do not want to know, either... SAVAGE LOVE: As gay as is humanly possible without being physically printed on glitter.