Look! Some of my heroes do appear on stamps: 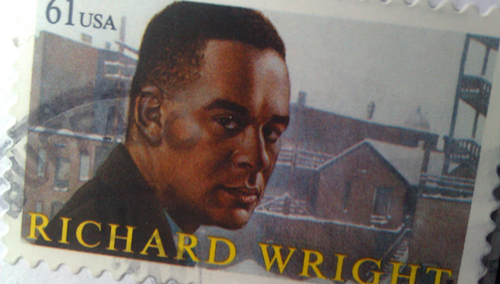 I only write because of Richard Wright. When 20 or so years of age, I read Native Son in an Afro Lit class in the woods of Pennsylvania and was transformed in an instant. Before reading that book, I wanted to become a filmmaker. After reading it, I attempted to become a novelist. Native Son (particularly its last third) led me to Dostoevsky. "Old Dusty" lead me to Russian literature. Russian literature and language, which I studied for a few years, lead me to Nabokov—English as Russian. From Nabokov, I went to Proust, Borges, and all the rest of it. But in the beginning it was Native Son.

Then somewhere in the middle of the 90s, I read "The Murders in the Rue Morgue," and to my surprise saw a direct connection between the orangutan in that story (the story that established detective fiction) and Bigger, the murderer/victim in Native Son. Having read every thing that Wright's leading (and French) critic, Michel Fabre, had to say about him, Mississippi's most famous Marxist (and existentialist), I knew that Edgar Allen Poe was at the heart of Wright's imagination. Bigger is a descendant of that violent ape. And that's the deeply troubling heart of Native Son: Wright imagined black rage in very racist terms. This, I think, is why Baldwin ultimately rejected his literary father, Wright, in the essay that made him famous. Baldwin knew that this darkness, a permutation of the heart of darkness (the African as pure animal and instincts), was at the core the great book.

See, it's good to have your heroes on stamps.