After gaining entrance to the Keck's office last night, then thinking better of exploring the crow's nest in the dark, I downed seven Alprazolam and still slept an uneasy sleep in the web office. After posting this morning's news, I downed some more sedatives and finished off Anthony's Jameson 12 Year before heading to Tim's office. Upon opening the door, I heard some scuffling and grunting from the crow's nest and then, after a minute, silence. I waited for a few minutes, pulled the last drink of whiskey from the bottle, and climbed the rickety spiral staircase up into the crow's nest. At the top of the window was a most baffling scene, but the first thing I noticed was a window open just enough for someone to climb in and out of it.

An inventory, with pictures, after the jump: Shotgun and bullet shell casings strewn about the floor:

One manila envelope with "DRUNKS NEED SHIRTS" written on it [filled with receipts from Value Village]:

One vanity mirror, electric razor debris stuck to the reflecting side:

Stockpile of Hennessy Very Special Cognac. Half of the bottles exactly half empty:

Heavily used copy of Dianetics filled with Post-It notes that say things like "INCISIVE!!!" and "TRY IN 2011":

Coupons dating back to 2003, mostly for meat products:

Three phonograph records: Tammy Fay Baker's Don't Give Up, a collection of JFK speeches, and How to Communicate Your Ideas:

Four cans of Rize, one open. [When I picked it up and shook the can lightly, I could hear the carbonation still fizzling.]:

One copy of Teen Witch: Wicca for a New Generation: Worrisome writing on the wall: 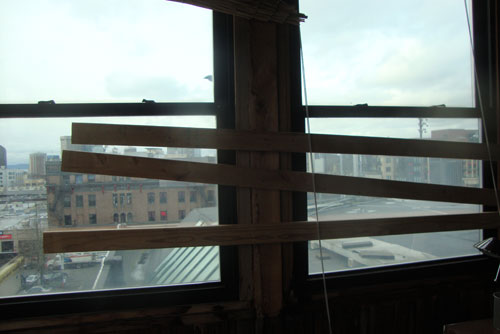