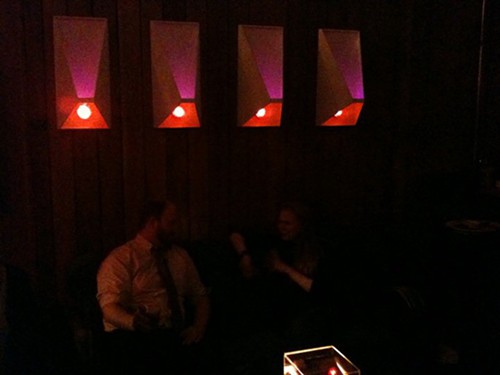 Last night I stumbled into a party at The Living Room, a Capitol Hill bar that's become a notable little art space despite its barness and its seeming near-total lack of wall space, thanks to the curation of Amanda Manitach, the (duh) creativity of artists, and the supportive ownership of Monika Proffitt and Clay Roach, who are also secretly plotting to open a satellite artist residency in New Mexico.

I'd gone to see the art show and figured it would be a slow night, but instead there was a sign that said "private party" at the door. I started to leave until I figured out it was a party full of artists who in fact would like people to see the art, so they ushered me in and tried to feed me and drink me. I stuck to the art: Troy Gua's show Pissing Contest. Gua made his name with mashup paintings of popular icons, and in this latest work he adds a touch of Vegas. Greeting you at the door is a white nude fountain sculpture of the artist's head on a stout Italianate body, pissing a line of neon-green light into a classical well. Hung above the couch across the narrow room are a row of boxes shaped like urinals with the edges sharpened, gleaming yellowish and pink thanks to lights shining beneath plexi (?) facades. It's like California finish fetish minimalist Craig Kauffman meets Duchamp. 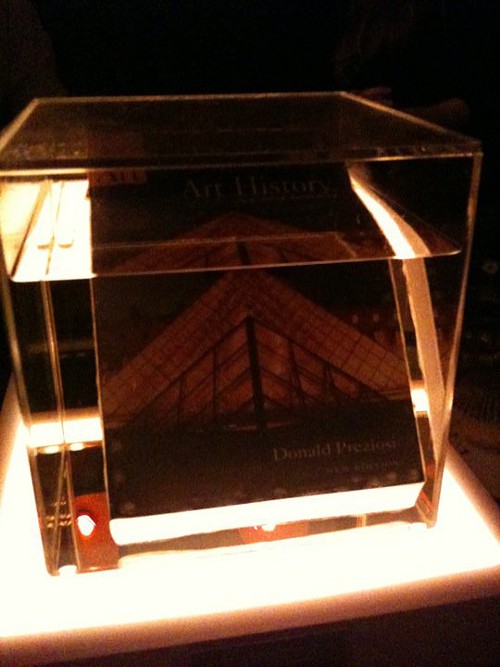 On the coffee table, continuing the Vegasization, is a plexi pyramid containing an art history textbook dunked in a piss-colored substance, a la Serrano's treatment of the crucifix in his photograph Piss Christ. Farther back, tucked into a little chamber under the stairs (this space has been used by various artists to great, unlikely effect, by the way), is a framed copy of The Stranger's article on "The New Guard" (including Gua), on top of which a stuffed rabbit is pissing a line of lime-green plastic onto Gua's face. Since I wrote the article, I think it is possible that I am the rabbit.

Gua's slick surfaces and generalities usually leave me cold, and this show is not really an exception. But then again, this may just be the pissing voice of the establishment talking, so I suppose the lesson is to listen as carefully as you look. Show's up through January 9.