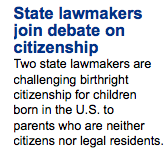 Anyone searching for an abject lesson in the power of framing need look no further than the home page of the Seattle Times, where a headline currently proclaims: "State lawmakers join debate on citizenship." What's wrong with this picture? Well, there is no serious legal debate on citizenship in the manner that the article suggests, at least not when it comes to the constitutionality of birthright citizenship.

Oh sure, there's a debate over the merits of birthright citizenship, and based on its record, I wouldn't put it past the Roberts Court to cast aside a century and a half of legal precedent in an effort to say that the Constitution says whatever the fuck the right-wingers on the Court want to say it says, but the 14th Amendment is pretty damn clear on the subject:

That's what the 14th Amendment says. That's what it's always said. And despite the Seattle Times' unchallenged regurgitation of State Rep. Matt Shea's (Racistfuckingidiot-Spokane Valley) bullshit assertion that "the United States Supreme Court has never directly ruled on the issue," that's what the courts have consistently understood the the 14th Amendment to say since 1898, when the U.S. Supreme Court directly ruled on the issue of birthright citizenship in United States v. Wong Kim Ark.

So by calling this racist, anti-immigrant campaign a "debate," the Seattle Times, intentionally or not, is playing right into the hands of the anti-immigrant racists by reinforcing their frame, much in the same way that our media has been complicit in the Discovery Institute's efforts to undermine science-based education in the United States, succumbing to their "teach the controversy" strategy in regards to so-called "Intelligent Design."

No, the real news here isn't that two Washington legislators, Shea and the equally hateful Republican wackjob Rep. Jim McCune, have "joined the debate on citizenship," but rather that Shea and McCune are a couple of hateful, Republican wackjobs who would rather focus their energy on deporting natural born citizens of the United States, than actually doing the hard work in Olympia they were presumably elected to do.

Shea and McCune deserve scorn, both as legal scholars and as human beings. Instead, the Seattle Times gave these assholes exactly what they wanted, by joining their effort to teach a legal controversy that doesn't really exist.