My recent posts on government waste and fraud, and the total fucking idiots who believe that our state's $5 billion budget gap could be closed merely by eliminating it, have sparked an energetic debate in the comment threads, so I thought it might be worthwhile to drill down on the subject even further, by examining one of the more talked about chunks of the state budget: higher education.

Let's start with a basic assumption that, just like in most private sector organizations, a governmental agency's single largest expense tends to come in the form of employee compensation. Indeed, this is particularly true of state and local governments, which generally provide commodity services performed by highly trained professionals, for example: doctors, nurses, attorneys, social workers, police officers, firefighters and, of course educators. (This truism, by the way, also helps explain why the cost of providing state and local government services tends to inflate faster than the Consumer Price Index, as such professional services do not lend themselves toward automation or outsourcing, and thus do not offer the same opportunity for productivity gains as the economy at large... but that is a subject for a different post.)

So if much of the cost of running state government comes in the form of employee compensation, then higher education is the perfect segment of the budget in which to look for waste and fraud, as it currently consumes 48,200 full-time equivalent (FTE) positions, roughly 44 percent of the 109,970 FTE staff years in the 2009-10 state budget as a whole. (Note, while K-12 spending consumes a much larger chunk of our state's general fund, K-12 staff are not state employees.)

That's a lot of FTEs devoted toward higher education—over 21,000 at the University of Washington alone! So, how wasteful is all this higher ed spending? According to the comparative metrics I can dig up... not so much. 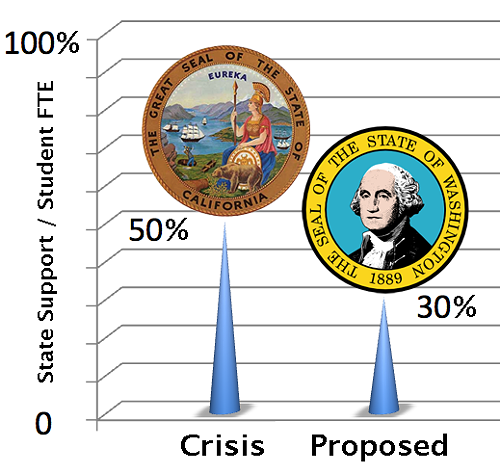 The first question to ask is whether Washington simply picks up too much of the cost of higher education compared to other states, especially at this time of fiscal crisis, and the answer is an emphatic "No!" For example, while Californian's lament that under Gov. Jerry Brown's proposed austerity budget, tuition payments would for the first time exceed the state's contribution to their university system's general fund, Bill Lyne points out at the United Faculty of Washington State's blog that Washington already crossed that line two years ago.

Under Governor Gregoire’s proposed budget, student tuition would account for 70% of our budgets and state support would drop to 30%.

That's right, California—incredibly budgetarily fucked up California—is still proposing to fund its university students at two and half times the rate Gov. Gregoire proposes to fund students at Western. If Gov. Gregoire's proposed cuts go through, it will amount to a 50 percent cut in state higher education spending over two bienniums, while slashing the state contribution to half the national average.

Okay. So proportionally, our taxpayers are investing less in higher education than those in California or most other states, steadily shifting the funding burden onto the backs of students. But what are we getting for our money? Again, according to Lyne:

The cost of a university education has not been spiraling out of control—it costs about as much now as it did in 1991. Tuition has been going steadily up because state support has been going dramatically down.

... Now, everybody, follow the bouncing ball: Washington’s universities are among the worst funded in the country and yet among the most highly rated, with the best graduation rates per 100 students enrolled of any state in the country.

That's right, Washington's public universities rank first in the nation in undergraduate degrees awarded per 100 enrolled students, and second in graduate degrees... yet our taxpayers spend less per student than in most other states. I'm not sure exactly how to measure productivity in higher education spending, but I'm guessing that's as good a metric as any.

Unfortunately, the flip side to our relative lack of investment in public education is that Washington also sports one of the lowest rates of bachelors degrees produced per 1000 population aged 20 to 34, thanks largely to the paucity of available slots at our four-year universities.

Oh sure, we keep hearing politicians and pro-business think tanks demanding more efficiency and greater accountability from our public universities and community colleges, and there's nothing wrong with striving for efficiency and accountability. But in terms of degrees produced per tax dollar spent, we're already tops in the nation.

So tell me... where's all that waste and fraud we keep hearing about? How is it possible to attribute 16 percent of our state budget to waste, when the segment that consumes 44 percent of state FTEs arguably boasts the highest return on investment in the nation?

Or, do the anti-tax/anti-government advocates actually believe that higher education and other core budget drivers are inherently wasteful in themselves, however efficient, being outside what they view to be the proper scope of government? If that's the case, I wish they'd just be honest and say so, so that we can get on to a productive debate over budget priorities, and stop wasting our time on overblown fantasies of rampant government waste, fraud and abuse.