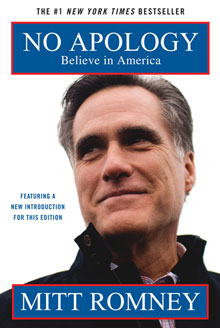 This is fucking awesome: The Boston Phoenix noticed that Mitt Romney modified some passages for the paperback release of his book No Apology in order to be more appealing to teabaggers:

The first rewrite excises a relatively even-handed assessment of the 2009 economic-stimulus package. In the original, Romney wrote that it "will accelerate the timing of the start of the recovery, but not as much as it could have." The paperback pronounces the stimulus "a failure," and blasts Obama's "economic missteps" with conservative red-meat language — for example: "This is the first time government has declared war on free enterprise."

The other major change comes in a chapter on health care. In the original hardcover, Romney tried to carefully distinguish between the Massachusetts law and the national version that was nearing passage as he wrote.

But the Massachusetts model has become Romney's bête noire among conservatives, who loathe the national reform they call "Obamacare." The rewritten paperback swings much harder, proclaiming that "Obamacare will not work and should be repealed," and "Obamacare is an unconstitutional federal incursion into the rights of states."

No apologies! The second change could be explained away by the Romney camp as saying it's reacting to the finalized health care reform bill. But the first one is a clear attempt to rewrite Romney's past for the sake of a few teabagger votes, and other Republican candidates should start smashing it into Romney's face immediately.