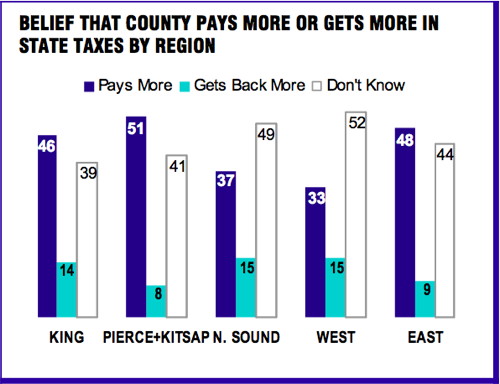 The big assumption underlying my piece in this week's Stranger, provocatively labeling rural Washington a Welfare State, was the notion that most rural Washingtonians don't know it... an assumption confirmed in a recent Elway Poll that found a plurality of respondents got their county's tax donor/recipient status exactly backwards.

In fact, only 13 percent of respondents thought their counties received more in state services than they paid in taxes, when in fact about 55 percent of the population lives in a net recipient county. Meanwhile about 43 percent thought their counties paid more in state taxes than they got back, not far off from the actual population of the donor counties. But as Elway points out, "the real political story is where respondents live, not their overall numbers."

Of those respondents living in net recipient counties, 43 percent incorrectly believe they pay more than they get back, while only 14 percent of those in donor counties got their status wrong. Giving credence to the stock liberal claim of living in a reality based community, a plurality of King County respondents got the question right, while more got it right than wrong in Snohomish, Skagit, San Juan and Whatcom counties. As for the rest of the state, respondents in every county but Kittitas got the numbers reversed (but then, Kittitas is the only Eastern Washington county to rank among the six net donors).

Who'd a thunk? No surprise either the way respondents broke down along partisan lines, with 50% of Republicans saying they paid more, and only 12% saying they got more back, compared to a 43-9 and 35-18 split for Independents and Democrats respectively.

Why does any of this matter? Well, here again, Elway echoes my broader thesis:

Everywhere you go in Washington state, with the possible exception of Seattle, you can hear the locals complain about how much they pay in state taxes compared to how much they receive in state government services. Eastern Washington voters complain about how they are sending all their tax dollars to “the coast.” Rural and small town residents believe they are paying for Seattle’s extravagance.

The belief that tax money is leaving the community to subsidize other areas of the state animates much of political and policy debate in Olympia. It has added significance this year due to the introduction of a bill to eliminate or consolidate some smaller counties that are not pulling their weight. The proposal is not likely to get very far, but it does present what educators like to call a “teachable moment” about state government and state taxes.

A teachable moment, unfortunately, that those invested in promoting an all-cuts budget, apparently don't want taught.