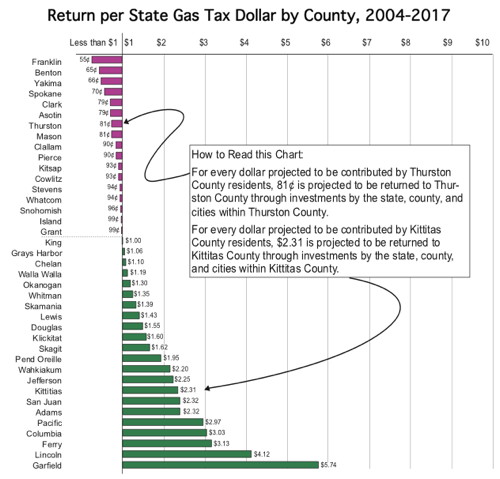 In all my posts on Slog, and in my article in The Stranger this week on rural Washington's status as a "Welfare State," I've only talked about state general fund revenue and expenditure. So just to be fair, I've posted the chart above from the Washington State Department of Transportation (PDF), illustrating the per county return on the dollar for gas tax revenues.

As you can see, this chart doesn't paint nearly as clear a picture as the general fund monies, with donor and recipient counties scattered geographically throughout the state, and King County getting back a dollar-for-dollar return. (That said, far-right-leaning Ferry, Lincoln and Garfield counties continue to top the charts of the welfare rolls.) But that's largely due to a more even distribution of projects in the highly charged nickel gas tax increase of 2003, and the nine and half cent increase that became the focus of I-912 in 2005. A quick glance solely at the "pre-existing funds" and you see a bit more familiar pattern:

Once again, a picture in which a handful of donor counties subsidize the rest of the state, only this time with gas tax dollars. And though it's not quite the same distribution as with general fund monies, the important number here is that for King County, which has for decades been exporting gas tax dollars to the rest of the state while its own infrastructure has slowly crumbled. The irony of course, is that with the bill for all this deferred, Puget Sound area road maintenance finally coming due, the rest of the state can't stop bitching about the high cost of our floating bridge and our "gold-plated" tunnel.