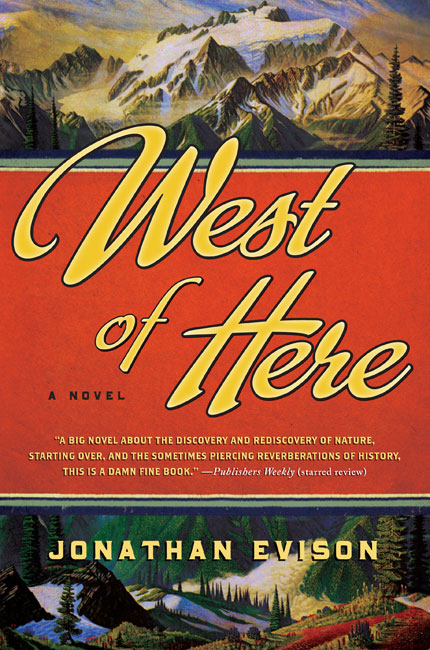 The Northwest as we know it was founded by hucksters, craven opportunists, and crazy people. As they descended upon one of the last untouched territories of the United States, they adapted to the land, cooling their temperaments and becoming settlers. Only a very few proved indomitable enough to do the reverse, to shape the landscape in their own image. Those stories—feats of engineering and will like the Denny regrade and the creation of the Ballard locks—are the closest thing we in the Northwest have to a shared story like the epics, the creation myths and heroic sagas of the distant past.

Bainbridge Island resident Jonathan Evison's new novel, West of Here, aspires to that kind of Northwest epic status. To that effect, it smartly begins with a world-class huckster named Ethan Thornburgh, a man in a not-quite-nice suit filing off a steamer in the fictional Washington town of Port Bonita in December of 1889. Thornburgh cuts a comic figure—"a waxed mustache mantle[s] his lip like two sea horses kissing"—but an ambitious one. Considering himself a bold inventor, he keeps a notebook full of momentary inspirations, like "the Walla Walla chip (a variation on the Saratoga chip—made with sweet onion), the electric stairs, the electric pencil sharpener, the magnetic coat hanger, and a flatulent comic review titled Will-o'-the-Wisp."

But the comedic Thornburgh comes to Port Bonita for a serious reason...[Continue reading.]

( Jonathan Evison reads at Elliott Bay Book Company tonight. Tomorrow night, I'll be interviewing him onstage at University Book Store. Friday night he reads at Third Place Books. You should go to one of these events.))