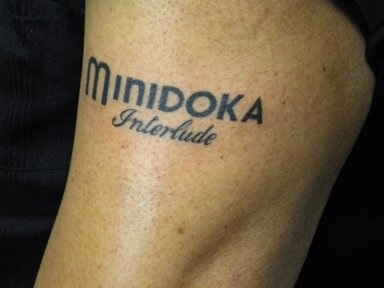 Roger Shimomura is almost 72 years old and he just gets more badass.

Last week, the painter got a new tattoo. It was to celebrate the opening of a show of 35 of his paintings at the Lawrence Arts Center in Kansas, where he lives and teaches art. The tattoo says "Minidoka Interlude."

Minidoka Interlude was the name of the annual book put out by the residents of the Japanese camp called Minidoka—where Shimomura was taken and imprisoned during World War II, when he was very young, with the rest of his Seattle family.

Knowing how it feels to be branded, Shimomura took his branding into his own hands.

And here (left) is another example of Shimomura's badassery: George Bush and Me, 2009.