The Big Balls of Chimps

For these three species of ape, the scientists have now proven that testes size is proportionate to sperm production.

The researchers claim that these findings also support theories that sperm production relates directly to reproductive competition and mating behaviour.

Previous studies proposed that testes are smaller in polygynous species such as gorillas where one alpha male monopolises mating with multiple females.

In promiscuous species such as chimps however, there is greater competition between males as several copulate with one female. For reasons that I cannot understand, the article doesn't compare chimp balls to human ones. Are humans more like chimps—big balls, lots of sperm, and lots of mates; or are they like gorillas—small balls, not so much sperm, and a few mates? To get an answer to that, we need to open the steaming pages of Sex at Dawn, a book by Christopher Ryan and Cacilda Jethá: 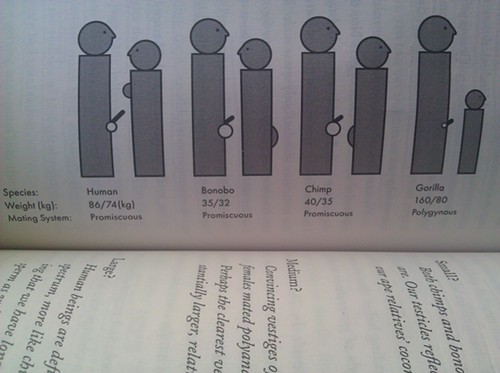 As you can see (page 244), human balls are somewhere between chimp balls and gorilla balls. But, as you can also see, humans have a winning penis. The gorilla's strategy is to fight other males for females; the chimp strategy is an explosion of sperm; the human strategy is depth.
The Stranger depends on your continuing support to provide articles like this one. In return, we pledge our ongoing commitment to truthful, progressive journalism and serving our community. So if you’re able, please consider a small recurring contribution. Thank you—you are appreciated!
CONTRIBUTE NOW