School Board Will Consider All Options, Including "Firing Top to Bottom," to Restore Public Confidence 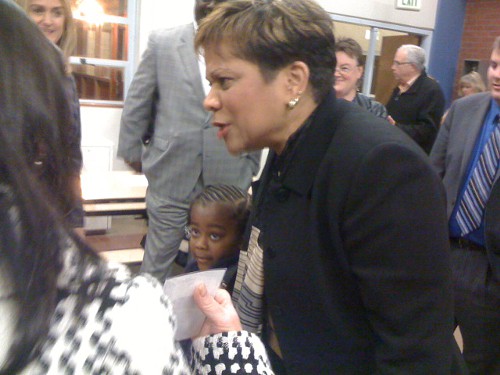 When asked whether the Seattle School Board was considering firing Superintendent Maria Goodloe-Johnson or buying out her contract—as was reported in the Seattle Times after its editorial board met with school board members today—School Board President Steven Sundquist would only say that "the board has all these options—it involves top to bottom."
Sponsored

The board is considering taking this action after a report released today by former prosecutor Patricia Eakes said that the superintendent could have done more to prevent $1.8 million in alleged financial fraud that is currently the subject of a secret criminal investigation by the King County Prosecutor's Office. The state Auditor's Office revealed the $1.8 million loss to the district in a special investigative report released this week.

As to whether the board was going to offer Goodloe-Johnson a buyout, Sundquist would simply say that the superintendent "has retained her own counsel." Sundquist said that the superintendent had a lawyer to assist her when she first joined the district and that she was consulting the same lawyer right now. "We have two basic pieces of information before us—the audit report and the lawyer's report—to make a final determination," Sundquist said. The board had hired Eakes for an independent investigation.

Sundquist said that it was unlikely the board would announce its decision about the superintendent or any other district management named in the report before the next school board meeting Wednesday. The board will be meeting in executive closed session Tuesday to discuss the report in private. "It's mid-winter break and a lot of board members are away right now," Sundquist said. "So we will probably get together to discuss this when everyone gets back."

The state Auditor's Office has released working papers for their special investigation of the Seattle school district's small business program whose manager Silas Potter awarded contracts to a number of vendors for services that didn't benefit the district or benefited his own private company. In one of the documents, when auditors asked Potter's direct supervisor, Fred Stephens, who left the district to work with the U.S. Department of Commerce, how much oversight he provided to ensure public funds were not used inappropriately, Stephens replied that Potter and his department should have been providing the oversight.

Pedersen Proposes Funding for Bridges with No Plan