School Board Makes No Decision Regarding Superintendent At Tonight's Meeting; Will Vote On Whether to Terminate Her Tomorrow

Updated at 8:45 p.m. with more information 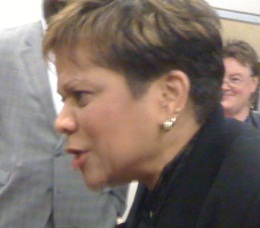 The Seattle School Board is preparing to terminate district Superintendent Maria Goodloe-Johnson according to a statement (.pdf) released by school board President Steve Sundquist four hours after the board met in closed executive session at 4 p.m. today.

This is the first time the board met since a state audit reported a financial fraud in the school district last week and sparked off multiple investigations.

Sundquist said that the board would listen to public testimony on the audit tomorrow and vote on a motion on whether to terminate the contracts of district Superintendent Maria Goodloe-Johnson and Chief Financial and Operations Officer Don Kennedy, as well as a motion to consider appointing Chief Academic Officer Susan Enfield as interim superintendent. The meeting agenda and motion has been posted on the board's website, and it shows that the board will vote on whether to terminate Goodloe-Johnson's without cause, meaning that her employment agreement entitles her to severance pay which equals 12 months of her salary ($264,000) and $9,800 in estimated benefits.

The board report says that "termination without cause" avoids the potential litigation, liability, and legal costs associated with a for cause termination. Efforts on the part of the board to reach a "mutual termination agreement" with Goodloe-Johnson were unsuccessful, the report says.

Kennedy would receive half of his base pay—$87,500—and about $4,900 in benefits. Neither Goodloe-Johnson nor Kennedy was present at the meeting today.

"The disturbing evidence of repeated violations of the public trust demands swift and decisive action by the Board," Sundquist said. "We are uniformly committed to restoring public confidence and to ensuring that this never happens again." In the statement Sundquist details the district's financial scandal and steps to regain public trust. The audit found that the district wasted $1.8 million on services never provided to the district or which benefited a private company formed by former school district employee Silas Potter, who is currently missing. Potter was in charge of the district's Regional Small Business Development Program, but abused his power by awarding mostly-bogus contracts to vendors.

An independent investigation by the school board revealed that although Goodloe-Johnson and Kennedy did not have in-depth knowledge about Potter's doings, they knew enough to have provided more oversight to prevent it. When independent consultants Sutor Group found problems with Potter's program, Goodloe-Johnson did not discuss the report with the board.

The district's financial fraud is currently being investigated by the King County Prosecutor's Office to determine whether it warrants criminal charges.

No decisions were made tonight; we will make decisions tomorrow night at our regularly scheduled public meeting. Board Members agree, however, that the investigations reveal deeply troubling actions and a series of red flags that should have been heeded. In addition, the investigations highlight areas of concern that we agree must be immediately addressed, specifically:
ς A lack of management oversight and accountability that allowed potentially fraudulent activity to persist for years without intervention;
ς Missed opportunities on the part of staff—in varying roles and at varying levels— to keep the Board properly informed;
ς A workplace culture within some parts of our organization that caused fear of reprisal among employees who might otherwise report concerns;
ς Management’s failure to act upon those employee concerns that are reported

The school board meeting is scheduled for 6 p.m. Wednesday at the John Stanford Center, first-floor auditorium, 2445 Third Ave. S.

How to De-stress After Thursday's Presidential Debate

You're going to watch The Future Is 0 with me.