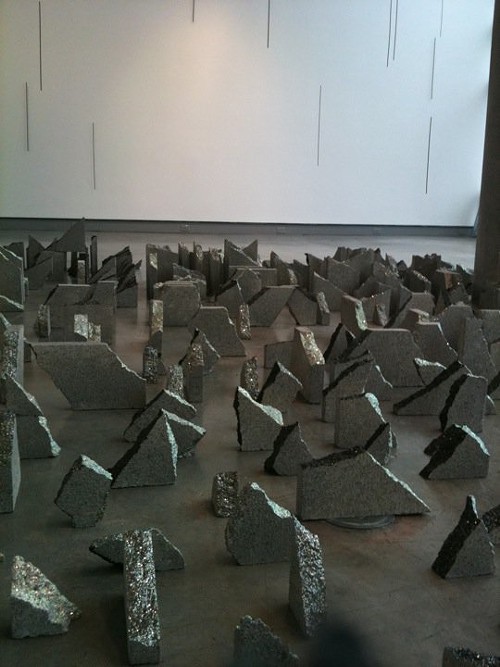 Mitzi Pederson built a city of sparkling ruins on the concrete floor at Open Satellite, set under a sky of streaky precipitation. She made it by smashing concrete pavers and coating the jagged edges with gunmetal and gold glitter—as if breaking apart suburban patio tiles released some magic stored inside them. The streaks—hash marks in midair—are thin wooden dowels painted in sumi ink and suspended from strings. Certain dowels have a light layer of glitter that twinkles as the dowel turns slowly in the ambient airflow.

In the gallery's corner, she built a loose campus of architecture, using platforms of silver reflective Mylar resting on foundations of wood scraps and more glitter-coated paver fragments. On the windowsill, she set up a row of marble slabs she found in Dumpsters, the light shining through their concentric layers (which reverberate in the growth circles of their wood-scrap pedestals), turning them into luminous headstones for mysterious burials—or episodes lifted straight out of the Parisian studio of the great modernist Constantin Brancusi, the master of rough-hewn majesty.

No wonder the Berlin-based artist has had all manner of international exposure before her 40th birthday. She spent two months here this winter. What she created isn't a departure; glam-edged pavers and wood scraps are signatures of her work. But the show's objects are also derived from and sensitive to their immediate environment; they're almost sensate. 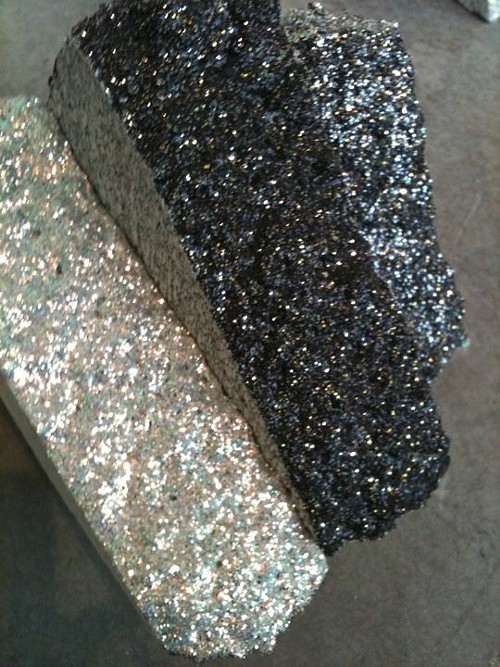 Atmospherically called the still night air, the exhibition comprises six separate works, all untitled. They can be considered in unison, as homage to the distinctive double-height gallery with its great wall of windows that brings the sky, trees, street, and new buildings inside for potential interaction. Each piece is also its own. Slide a camera between two of the low Mylar platforms and snap a picture—there are unseen worlds of colored surfaces and reflections within these miniature campuses, if only you can make yourself small and low enough to enter them. On the macro level, these Mylar surfaces facing upward transport the tiled ceiling, studded with lights, down to the floor in distorted, dreamlike chunks.

In a beautifully written review on Artdish, Adriana Grant interprets Pederson's untitled works in terms of the illnesses brought about by Bellevue's (now-stalled) development—a subject that has been the subtext of several other shows at the excellent Open Satellite (reviews here, here, and here, and a full, illustrated exhibition archive here).