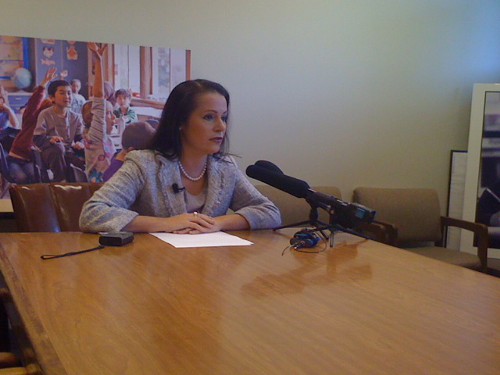 Seattle Public Schools Interim Superintendent Susan Enfield stressed at a media briefing this morning that she didn't cave into pressure from the community and reverse her decision to fire Ingraham High School Principal Martin Floe.

"I think there's a big difference between caving and listening," Enfield said. "The decision that I made originally was hard, but I made a commitment to the community to listen and I listened. I felt this was the best way to move forward."

Enfield announced Tuesday that she had decided to renew Floe's contract for another year, a week after she told the Ingraham community that Floe would not be coming back for the 2011-2012 school year. Enfield's initial decision stunned and angered parents, teachers, and students at Ingraham, sparking off a vociferous protest that included rallies, petitions and a Facebook support group.

Floe had decided to appeal Enfield's decision to fire him. Enfield said once again that test scores did not play a part in firing Floe. The school district sent out a press release last week which indicated that test scores, if not the entire reason, might have been one of the reasons for Floe's dismissal.

But Enfield said that her decision to not renew Floe's contract had come after a year-long review period. "I have to make the best decision with the data I have," she said. "... The challenge was Floe and I were privy to information parents didn't have. So that was frustrating." Enfield acknowledged that she had come across new data this week that had also helped her change her mind. "Clearly the process was not clear and it was taking a toll on the community," she said. "I hope they realize that I listened."

Floe will be on probation for the 2011-2012 school year. Enfield did not want to talk about what areas Floe would need to show improvement during this period. "He will be receiving ongoing support from his executive director and I will be giving support as well," she said. "I am looking forward to moving on from this and focusing on teaching and learning."

Enfield said that the district was focusing on the new principal evaluation system this year, which is part of the district's collective bargaining agreement with the Seattle principals association. "Principals are going to be working with teachers to improve student performance."

Enfield praised the teachers at Ingraham for the way they showed support for Floe. "They were wonderful .. I had a good conversation with the PTSA as well. When I say I listened, I listened."

She added that part of the problem was that people failed to understand that there was a proper process in place. Enfield hopes to make that more transparent in the future. "When we make hard personnel decisions, we provide as much information as we can, but we can be much more clear on what the overall process looks like," she said. District officials are meeting today to discuss that, she said.