Staff at Sound Transit, the regional authority building light rail, want to pay for nearly half of a transit tunnel under downtown Bellevue by siphoning up to $150 million in transportation funds that were generated for Seattle's light-rail system, sources tell The Stranger. Some fear this would eat up money from Seattle's taxpayers to fund a suburban project they would rarely use. 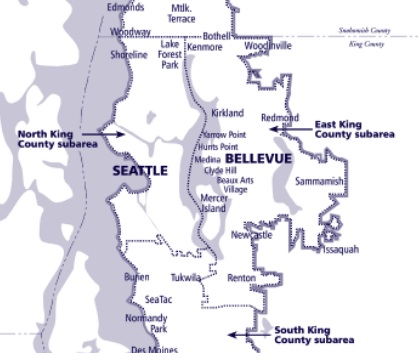 The issue stems from five sub-areas that divide the regional transit district (Snohomish County, South King County, Pierce County, North King County, and East King County).
Generally speaking, each district approves taxes to pay for projects in its own area; e.g., North King County (which is mostly Seattle) is paying for the light-rail extension from downtown to Northgate, and East King County is paying for the ST2 extension to Redmond via Bellevue. The question is, what happens if the taxes that voters approve for their light rail don't cover the actual cost of the final alignment selected by city governments and members on the Sound Transit board?
One option: Take from a subarea that does have the money.
This afternoon, the Sound Transit board's agenda features a resolution selecting the preferred Eastside alignment for Link light rail, which includes a tunnel under downtown Bellevue. However, the tunnel would cost $329 million more than the amount allocated for this portion of the project when voters passed the ST2 extension in 2008. To cover that cost, the City of Bellevue has pledged to chip in $180 million and that leaves—depending upon various methods to slice and dice the shortfall—$138 to $150 million unpaid. Although Sound Transit staff have reportedly considered various options (selling real estate, shrinking the scope of the Eastide alignment, and delaying the project to save money on bonding), those weren't the chief idea presented to regional leaders yesterday. Several sources say that Sound Transit staff specifically asked leaders in the North King sub-area cities (again, mostly Seattle) to contribute $150 million to support the East Link tunnel.
North King County is apparently one prime revenue source, according to people familiar with the recommendations, because sales taxes have exceeded previous forecasts and bids for the University District stations have come in under budget (not accounting for cost overruns typical of tunneling projects). Moreover, the East Link begins in Seattle and will include a station at I-90 near the Mt. Baker neighborhood. Seattle residents could arguably benefit from the tunnel alignment in Bellevue, but it's hardly clear who benefits more (suburbs benefiting from our Central Link of light rail or us from their East Link). That said, Sound Transit isn't supposed to tap one subarea to pay for a project in another.
Time is short to make the first move. "The tunnel route in downtown Bellevue is contingent upon the City of Bellevue entering into a term sheet with Sound Transit before August 3, 2011 and a binding umbrella memorandum of understanding by September 30, 2011," says the Sound Transit resolution. It would require the City of Bellevue to provide "a firm funding commitment of $160 million" but the resolution doesn't specify where Sound Transit would tap the rest. In other words, leaders could commit to the Bellevue tunnel as soon as today without identifying a funding mechanism, then figure out how to pay for it—and figure out who will pay for it—in a couple of years.