Attorney General Rob McKenna Demands That Backpage.com Explain Itself (And So Do 44 Other AGs) 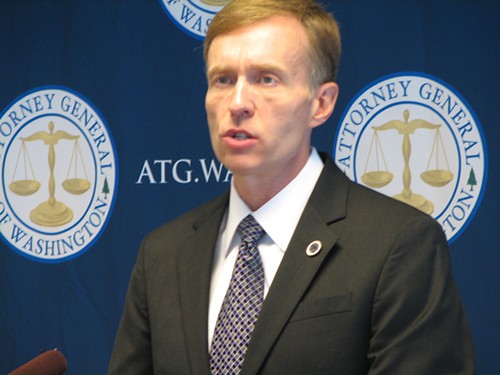 This morning, Washington State Attorney General Rob McKenna entered the fight between Backpage.com and an increasing number of public officials over whether Backpage is doing enough to combat child prostitution.
Calling on Backpage to "do the right thing," McKenna released a letter signed by himself and 44 other attorneys general that cites "more than 50 cases, in 22 states over three years, involving the trafficking or attempted trafficking of minors through Backpage.com."
The letter asks 21 questions of Backpage, essentially trying to force the site to prove it's being a good citizen. The whole thing was framed as a request—"in lieu of a subpoena"—but the threat of possible legal action was strongly implied.
Backpage—a nationwide online classifieds operation owned by Village Voice Media, LLC, and used by the VVM LLC-owned Seattle Weekly—claims it already has strong controls in place to prevent child prostitution. It also asserts a First Amendment right to accept legal ads, and has argued in court that, to the extent that ads for illegal services show up on Backpage, the fault lies with the law-breaking advertiser, not the online ad-space seller.
McKenna noted that illegal ads keep showing up on Backpage, and called Lt Eric Sano of the Seattle Police Department's Vice Unit up to the podium to announce that as recently as last night an ad for a known underage prostitute had appeared on the local version of Backpage.
McKenna also said that all of Backpage's arguments in defense of its operations were made years ago by Craigslist—before, under pressure from McKenna and other attorneys general, and Congress, Craigslist eventually stopped allowing escort ads altogether.
McKenna went on to suggest that making money, rather than keeping the First Amendment strong and healthy, is VVM LLC's real motivator.
He said the company makes $2 million a month from escort ads on Backpage, and added: “The First Amendment has never been understood to be a shield for criminal activity.” He accused Backpage of "facilitating a marketplace for criminal activity that is a magnet for criminals seeking to exploit children," and stated: “We’re not making a legal argument in this letter about their First Amendment rights. We’re saying, 'Do the right thing.'"
A spokesperson for Backpage did not respond to a request for comment.
The Stranger's online classifieds require in-person age verification for anyone placing or appearing in an escort ad—unlike Backpage, which only requires the person placing the ad to check a box affirming they're of age—and no cases of underage prostitution have been linked to The Stranger by McKenna, Seattle Police, or Seattle Mayor Mike McGinn, who began raising this issue in July.
McKenna said he had spoken to McGinn this morning and "thanked him for his great work and Seattle’s leadership" on this issue. McGinn then returned the favor, issuing a statement thanking "Attorney General Rob McKenna and the attorneys general across the country for calling on Backpage.com to stop being an accelerant for the sexual exploitation of children."
While the positions of the various parties involved have become pretty familiar at this point, McKenna did add one bit of new and interesting information at this morning's press conference.
He said he'd recently met with VVM board members who "were up front about the fact that there’s prostitution on their site." McKenna said the board members tried to argue against cracking down on Backpage by saying that a "prohibitionist" stance toward prostitution was ultimately counterproductive. McKenna rejected that idea.
“This false model that they promote—that 'Well, you know, everyone’s just being uptight and prudish'—it’s false," McKenna said. The issue, he said, is that "prostitution is a form of human trafficking—a form of modern day slavery. There are very few volunteers.”
What happens if Backpage and its owners don't answer the questions from McKenna and the other AGs?
"We'll see," McKenna said.
UPDATE: Samuel Fifer of SNR Denton, a law firm working for Backpage, writes: "We received the NAAG [National Association of Attorneys General] letter earlier today and we are hard at work preparing a response to it."
The Stranger depends on your continuing support to provide articles like this one. In return, we pledge our ongoing commitment to truthful, progressive journalism and serving our community. So if you’re able, please consider a small recurring contribution. Thank you—you are appreciated!
CONTRIBUTE NOW