There but for the Grace of $20 Go We: Pierce Transit Slashes Service 35 Percent 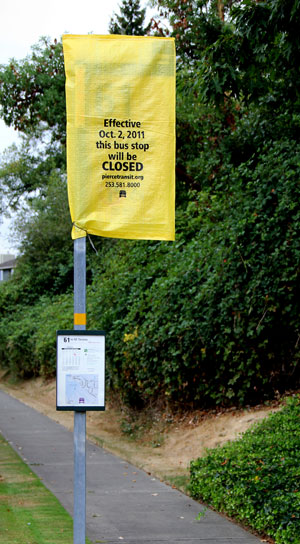 Back in the midst of the $20 car tab fee debate, some opponents accused King County Metro of using scare tactics to force the issue and grab an extra Jackson out of our wallets. The 600,000 annual hours of proposed cuts, roughly 17 percent of total Metro service, impacting four out of five routes and 80 percent of riders... it was a bluff some critics insisted. The Seattle Times editorial board chastised King County Executive Dow Constantine for putting "the public over a barrel," arguing that Metro could instead seek further concessions from its bus drivers, and squeeze yet more "efficiencies" out of its transit system.

Well, if Metro was bluffing, Pierce Transit certainly was not. Facing a $51 million annual shortfall, the failure of a three tenths of one percent sales tax increase last February, and the refusal of the legislature to grant them the same $20 car tab fee authority just exercised by King County, Pierce Transit is in the process of finalizing the 35 percent cut in transit service they'd been warning about all along. That's 237,000 annual service hours of cuts, eliminating or reducing service on dozens of routes. And in case you think such drastic service reductions are temporary, well think again:

Approximately 600 bus stops, including 35 with shelters, will be closed on October 2. Following that, Pierce Transit Facilities Maintenance crews will begin physically removing the bus stops; the sign pole, shelter structure, or bench that may be at the site. The process is scheduled to be completed by the end of November.

When critics jabber about the need for increased efficiency, this is what they're advocating: The actual physical dismantling of our transit systems. This is what the Seattle Times, Reagan Dunn and other staunch car tab fee opponents wanted for Metro. This is what the Washington Policy Center's Michael Ennis brushed off as "not a bad thing."

Fortunately, cooler, more compassionate heads prevailed here in King County... for the moment. This temporary $20 fee expires after two years, and the council has no legal authority to extend it any further. That gives us only two years to plead with the legislature to secure a more stable source of funding than the volatile sales tax that has taken down transit systems throughout the state. This is no bluff, for should we fail, Metro riders should expect to see their bus stops and shelters torn from the sidewalks too.