Plenty o' updates after the jump.

Originally posted at 2:12 PM: With a phalanx of cops standing by, park rangers at the Occupy Seattle protests in Westlake Park "are going from tent to tent, telling protesters to take their tents down so they can clean the whole park," reports Paul Constant. Rangers add that folks won't be allowed to set their tents back up once the park is clean. At this point, only eight tents remain standing, Paul says, but protesters say they intend to wait until 7:00 p.m. and set up their tents again.

"It's getting very hectic here," Paul reports. Lots of people are chanting: "We are the 99 percent."

UPDATE at 2:20 PM: Police are encircling the tents as park rangers dismantle the them, says Paul via cell phone. Around the circle of cops and rangers are larger circles of protesters. The cops are in regular uniform, not riot gear.

KING 5 has a photo of protesters locking arms around a tent.

“We do not want people to get arrested,” Bazara clarifies. “That is not the motivation; the motivation is to occupy Seattle and to show our support for the nationwide occupy movement that is happening all over the country. She also makes a plea: “We are trying to contact as many people as we can to get down here and show their support.”

UPDATE at 2:37 PM: Bazara confirms police have arrested two protesters. "They were pulled out of their tent that they were occupying," she says.
UPDATE at 2:46: Paul reports on the two arrests so far: "There was a protester in front of a tent and a protester in a tent and they just arrested them. They were pulled away and they went peacefully." He says police are down to the last two tents. "Police are approaching the big tent where the majority of the tent occupiers are."
UPDATE at 2:48: I just spoke on the phone to Peter Donahue, who is inside one of those last two tents. “We want to hold this ground. If we do, maybe they will leave,” he says. He says authorities told them to leave on Saturday, but they managed to stay put. Why do they need tents? "It’s wet and it's cold and it's nice to have shelter. “I don’t want to get arrested but at this point, I feel like enough is enough—nothing is going happen if a bunch of us don’t take a stand.”
UPDATE at 2:50 PM: A photo of an arrest and the police hauling a man off. Video of the first arrest.
UPDATE at 3:03 PM: A livestream (with an annoying ad that ends after 30 seconds) is here.
UPDATE at 3:11 PM: Occupy Seattle tweets that there have been a total of nine arrests:

UPDATE at 3:29 PM: Joe Miraballa at Seattlepi.com writes an open letter to McGinn asking him to let the protesters stay.

UPDATE at 3:39 PM: There's now a cold standoff. Three tents are stuffed with protesters and cops are hanging back, reports Paul Constant. "Protesters are linking arms around one of the tents," he says. "I don't know why they chose that tent—I think they got their shit together enough to surround it."

UPDATE at 3:46 PM: Organizers ask for your help: "We need more tents, we need more people, we need new supplies."

UPDATE at 4:04 PM: Police just arrested another protester. Officers had targeted one of the tents that doesn't have protesters linked around it, Paul says, and pulled a person out of it. He says police are moving slowly, methodically. Two tents remain.

UPDATE at 4:08 PM: Police have dismantled another tent, and now only one tent remains. Paul says, "That's the one with everyone ringing it—that one's going to be a real bitch."

UPDATE at 4:46 PM: The last tent is down, two more people have been arrested, and the others have dispersed, Cienna reports. As the cops backed slowly out of the crowd, protesters chanted, "Fuck the police! We don't want you here! Get out!" Then several people began shouting, "Let's block the streets!" Cienna says. At that point, a small group of people walked out onto Fourth Avenue to block traffic when "three cops on horses nonchalantly butted them back onto the curb with horse butts," Cienna reports. Now horse butts are keeping the crowd on the curb.

UPDATE at 5:05 PM: Seattle Police Department spokespeople don't know what charges they will seek for the protesters (I'm guessing trespassing?). The SPD will post information on those charges later this evening, the media folk say.

UPDATE at 5:22 PM: Protesters with a megaphone just announced that police at the West Precinct are processing and releasing folks who were arrested, Cienna reports. Anyone who wants to stay the night can stay, according to the people with the bullhorn, as long as they don't have a tent or sleeping bag (blankets are apparently okay).

Meanwhile, seven parks employees are spraying down every inch of the park's granite paving, which was already clean from the days of rain. "They came in using the excuse that they wanted to clean the place, so now they are scrubbing the plaza," Cienna says. They even have something that looks like a Zamboni to clean off the supposed protester stink. 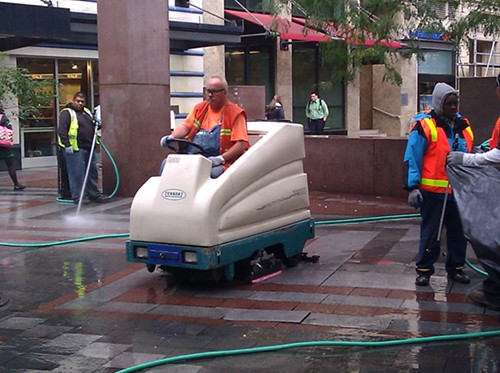 "The crowd has turned into more of a 'Fuck the Police' crowd," Cienna notes. "I haven’t heard anything about banks or any other Occupy Seattle topic."