Labor Leaders, Rallying at Westlake, Urge Unity with Occupy Seattle (And a No Vote on I-1125)

"Now you know how we feel," said Jeff Johnson, president of the Washington State Labor Council, telling the few Occupy Wall Street protesters at Westlake this morning that labor, just like them, has been alternately demonized and shrugged off by the powers that be for a long, long time.
He thanked them for focusing Americans on the country's growing wealth gap, and received thanks from the protesters in return.
Karrsen Brannon-Young, elected by the protesters to speak for them at today's union-backed "Rally for Good Jobs," said union support gives the Occupy movement "more legitimacy," and he welcomed the roughly 200 union folks who'd shown up for the sunny mid-morning rally. "We want as much help as they can give us," Brannon-Young, who said he's been at Westlake for five days, told me later. "As much help as anyone can give us."
Brannon-Young said protest leaders would be meeting with union leaders later today to discuss next steps, but that everyone's now looking ahead to the next rally, the National Day of Action on Saturday, at noon, at Westlake. "We're gaining momentum," Brannon-Young said. "Our next goal is to figure out how to appeal to the broader public."
King County Executive Dow Constantine also addressed the crowd, recounting his own family's working class Seattle roots and recalling a time when living wage union jobs were abundant. "A small group of powerful people, public and private, has worked aggressively to steal that dream," Constantine said.

The crowd cheered: "What do we want? Jobs! When do we want 'em? Now!"
This rally was much more focused on connecting economic frustration to targeted political action than others I've been to at Westalke recently, with speakers repeatedly calling on the crowd to vote against Initiative 1125, which is being bankrolled by wealthy developer and Bellevue Square owner Kemper Freeman. It could delay major state road building projects while also derailing plans for light rail to Bellevue.
Lee Newgent, executive secretary of the Seattle/King County Building & Construction Trades Council, noted that there are more and more working class people in Freeman's Bellevue these days. "How are they getting to Seattle right now?" he asked. "They're taking the bus. How should they be getting to Seattle? They should be taking light rail."
Alluding to Freeman's financial backing of the initiative, and Freeman's longstanding preference for highway construction over light rail construction, Newgent said: "I do not need this Bellevue Mall initiative that, the whole idea behind it is you should be able to drive your car to the mall and load it up with packages and drive it back."
In conclusion, Newgent told the crowd: "Don't just vote No. Vote Hell No!"
David Frieboth, executive secretary of the King County Labor Council, urged everyone—protesters and labor—to stick together going forward. "They're trying to divide us," Frieboth said. "They're trying to get us looking at each other and wondering what the problem is."
There's no time for division, Frieboth said. "Now let's go kick some ass." 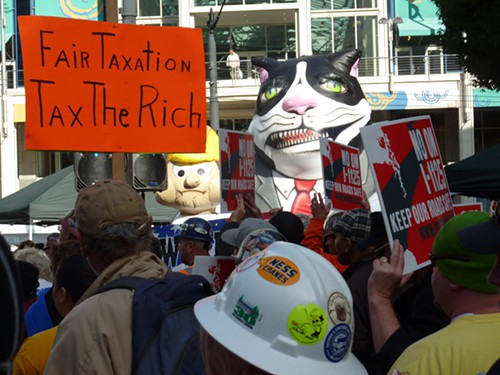 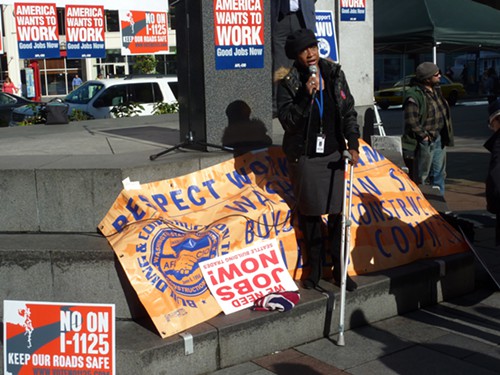